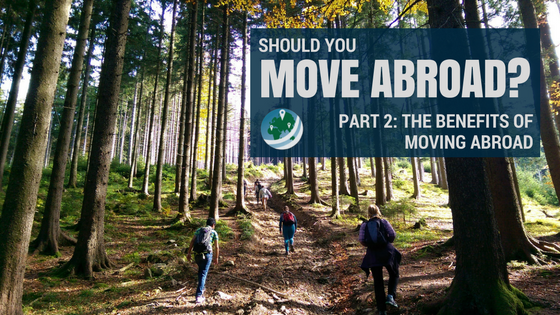 This post is Part 2 of my two-part miniseries on moving abroad and reflecting on our motivations and purposes for doing so. If you haven’t already, check out Part 1 of the series here, before reading further.

So, last week was kinda a downer. In Part 1, I focused on the hardships that come with moving abroad and challenged you to really think about your reasons. This post is a necessary follow-up to that one. Having read some other threads and comments on /r/IWantOut and a reply to my post on twitter, I think my first post have come off a bit judgemental. It was definitely not intended to be, but I can see how someone might think what I wrote was meant to doubt or judge people’s motives. Quite the contrary, I want people to think about their motives, and to give themselves a positive reasoning for moving abroad. This post, focusing on the positives and bringing it all together to answer the question “Should I move abroad?”, should make that point much more clear.

Moving Abroad can be Amazing

No matter your reasons for moving abroad, there are several benefits that come with moving your life to a different place. In fact, some of these may actually be a major reason for you to move abroad. Either way, moving abroad can benefit you in almost every way. Mental, social, personal, intellectual, emotional, and professional aspects of your life can improve or benefit from uprooting yourself and settling back down somewhere totally different. 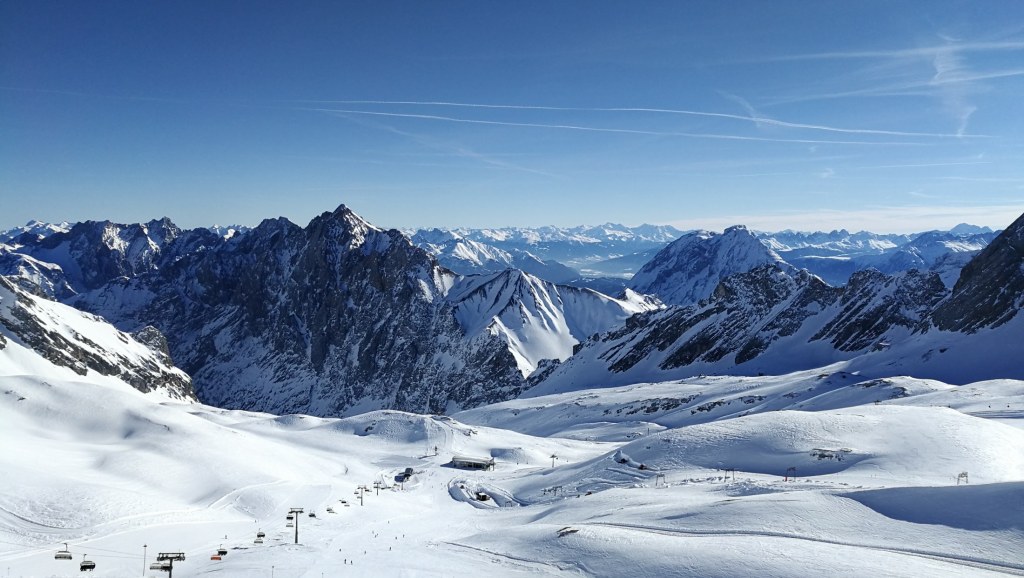 Being able to easily take a day to go skiing was certainly a benefit of moving abroad for me.

Of course, I’m not suggesting that moving abroad will do all of these things, just that it can. And also, of course, it’s not as if moving abroad will solve all your life’s problems, or that it’ll be easy. I think I’ve made that abundantly clear elsewhere on this site, though. See Part 1 of this miniseries or another similar post, The Challenges of Living Abroad.

However, it is precisely through these challenges and changes that help us grow. I’ve said it many times and I’ll say it many more. Moving abroad often means reverting to the social and cultural equivalent of a 5-year-old. By that I mean, when you move to a new country, you really don’t know how people (to some extent), or society (to a greater extent), function.

How exactly is a move backward in society a benefit to anyone? Just hear me out.

Here’s an incomplete list of all the very basic things I lacked before moving to Germany. At home, these things would have been second nature to me, having grown up in US society, but around the world, lots of things are done differently: 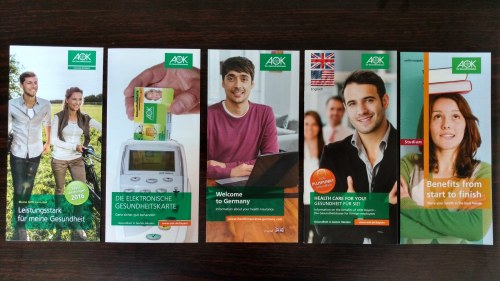 I got a bunch of paperwork, including all these pamphlets from AOK when I signed up. Actually, I got a bag of goodies too… including a towel (don’t forget to bring a towel!), a soup ladle, and a pizza cutter. All three of which I still use today :). Moving abroad is hard enough, so some helpful items, plus a bunch of info, were very welcome!

A couple of these are really vital to be able to stay in Germany, so it was a steep learning curve. After I got a handle on the big items, the smaller quirks came with time. It can definitely be embarrassing when you lack a basic skill like cooking a sausage or ordering a beer, but you’ve just got to roll with the punches.

The thing is, it’s exactly the ability to take things in stride that you’ll develop, simply out of necessity. I don’t know how miserable I’d be if I got defensive, irritated, or frustrated every time I didn’t understand a joke or know something seemingly vital to everyday life. When things don’t go how you expect, you need to be flexible and self-reliant enough to adapt and adjust. This will happen a lot in your new home. Have a laugh at yourself, realize you don’t know anything anymore and go with the flow. As my Calculus teacher from senior year of high school used to say, “champions adjust.” Moving abroad kinda forces you to be a champion (shoutout to Mr. L!).

This one is probably the most visible benefit of moving abroad. Obviously, others won’t value this as much as I do, but ever since I was bitten by the travel bug back in 2014, I’ve simply wanted to see more places, meet more people, and experience more cultures. Moving abroad was simply the best way to do that for me. It has opened my eyes more than I ever could have imagined. Simply by living in a place with a different language, culture, and way of life has amazingly accelerated my understanding of them.

Sure, I could have learned German back home, studied German culture and history, and read about modern German society. But all that would have taken an exponentially longer amount of time to get anywhere close to how familiar I feel with the German language and culture. Experiencing something first-hand always teaches you faster. So if you want to learn another language or understand another culture, moving abroad is one hell of a way to do it.

Living in a new place and learning about their culture and society is such a pleasure, even if it can be a bit embarrassing at times like I explained above. After moving abroad, we’re exposed to new foods, music, art, TV, and history on a daily basis. Since moving here, I’ve learned so much about Germany, much more than I could have from afar, just by living here and among the culture. 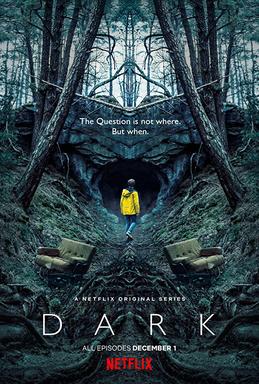 Side Note: the series is fantastic! It starts off a bit slow but really picks up a bit into the series. We couldn’t stop watching! Image credit: Poster for the Netflix series “Dark”. Licensed under fair use.

Take the new Netflix series Dark, for instance. It takes place in a small town called Winden, and the story revolves around the mysterious nuclear power plant that employs much of the town. The story and the show become much more powerful when you know the history of nuclear power in the country. When the stereotypical cooling towers loom in the background of scenes, Germans understand something different than Americans do. In general, Germans are very wary of nuclear power. In fact, many anti-nuclear groups have sprung out of small towns over the operation of these plants or waste storage facilities. I would hardly be surprised if there was an anti-nuclear message in the series, or maybe the writers were simply just playing into the existing mythos around nuclear power in Germany.

The town’s name, Winden, is somewhat common in Germany, as there are 4 of them on Wikipedia. I think the show version could be based on Winden im Elztal, a small town surrounded by the mysterious and whimsical Black Forest, a part of Germany with plenty of lore and mythology to go around. The show is even more interesting knowing all these little histories and backstories that lay the groundwork for its drama.

Trying to understand a culture without understanding their language is like trying to sail without wind. Sure, the boat floats, and you could row it. But, at some point, you’re going to want to have some wind in your sails.

Being able to speak another language is such an amazing skill to have. The way I see it, learning German (or any other language for that matter) allows me to interact on a deeper more natural level with millions of people. I like learning languages anyway, I find it so interesting how similar and how different the world’s languages are. So maybe I’m just weird, but the opportunity to learn another language by living in another country was a no-brainer. Also, as a native English speaker, learning German opens up a whole new understanding of the English language, as they were one in the same at some point in history.

Generally speaking though, learning a new language can benefit you in many other ways. Study after study has shown evidence of improved cognitive capabilities among bilingual people.

A New Way of Life

Ironically, living abroad has taught me just as much about living as it has everything else. By living here (especially with a German girlfriend!) and observing the city and people around, I’ve learned about different ways to live. To say it has opened my eyes would be an understatement – it has changed my behavior drastically, too. One of the most visible changes in my lifestyle has been actually walking the walk of reducing my footprint on the Earth. There are several ways I’ve changed my lifestyle to be more sustainable since moving to Germany. Sure, I was vaguely conscious of my impact on the environment before, of course, but since moving here, I have actually taken steps to reduce it.

Another way I’ve adopted the German way of life is my changed perspective on work-life balance. Here, vacation means vacation. It doesn’t mean sick days, holidays, or days when you really should be working. Far fewer people are connected to work while they’re on vacation – of which they get a minimum of 4 weeks. I used to be happy with my somewhat generous with my accrual of one day in my PTO account every two weeks (PTO was used for sick days and holidays as well). I’ve gotten much better at relaxing and enjoying my vacation time, and separating work time from free time more generally, too.

So there are two examples of the new way of life I’ve learned from moving abroad to Germany. However, it’s not that living in Germany has totally changed how I live. Instead, what it has done is allow me to really see and experience other ways of doing things and other sets of values so that I can examine my own from a different point of view. That way, I can pick and choose the way I want to live.

So, Should I Move Abroad?

That’s up to you.

Think about the benefits that I’ve talked about in this post and the challenges I wrote about in the previous post. While it’s certainly not for everybody (nor available to everyone), moving abroad is an amazing experience for many people. If you’re mulling the idea around in your head and an opportunity appears, seriously think about taking it. Challenge yourself to grow and to adapt to a new life in a strange place.

Remember, a move abroad isn’t permanent. You can always return home, or even to another place in your home country if you still want a change of pace. If you decide to go back home after a decent stint of living abroad, that’s not a failure. You tried, you put yourself out there and did something you wanted to do. Maybe it just didn’t work out, or some better opportunity drew you back. You certainly wouldn’t be the first person to do so. Be proud you took that leap of faith in yourself to do it in the first place. At the very least, you’ll go back with an experience you won’t forget. 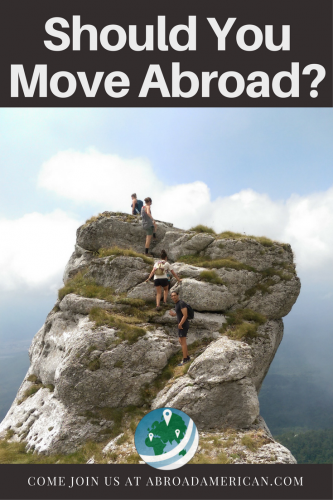