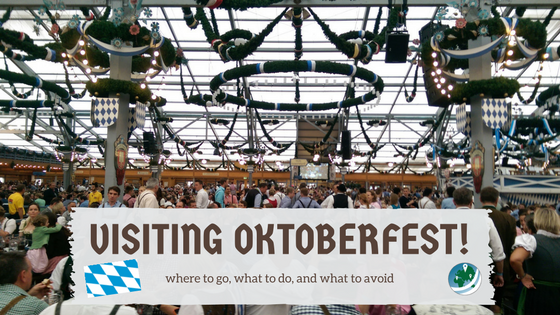 Munich’s most famous attraction and the world’s largest folk festival begins this weekend! If you’re planning on visiting Oktoberfest this year, in this post I’ll answer some more common questions I’ve seen floating around the internet. This one comes from a question posted to Like a Local – a great website for, you guessed it, learning how to travel like a local from locals in cities around the world.

Inside one of the famous Bierzelten! (beer tents)

The user asked 4 separate questions in one post, so I’ll tackle them one-by-one below. The questions are in their original form, and my answers are mostly the same as what I posted in my response on Like a Local.

Speaking English in Munich and at Oktoberfest

1. We speak English and a little French, will we have problems communicating with the locals.

No, not really. You should learn a few German words and phrases to impress the locals though! Older people will speak much less English than younger people, so keep that in mind. But generally, most people under 35-40 speak decent English. In the service field, English menus abound and there will be at least one waitress or waiter with English skills, if not – pointing at the item is your friend. At Oktoberfest, you won’t have to speak much German besides some basic ordering phrases to reduce confusion.

First, to get the normal Oktoberfest beer anywhere in the festival, just say “ein Maß bitte!”. “Ein” means “a”, or “one”. “Maß” (pronounced like “Mahss”, the ß thing is pronounced like two s’s) is the word for the 1-liter glass of beer. “Bitte” means please, plus a lot of other stuff depending on the context. Please just remember that it isn’t a “stein”, it’s a Maß. “Stein” means rock in German. 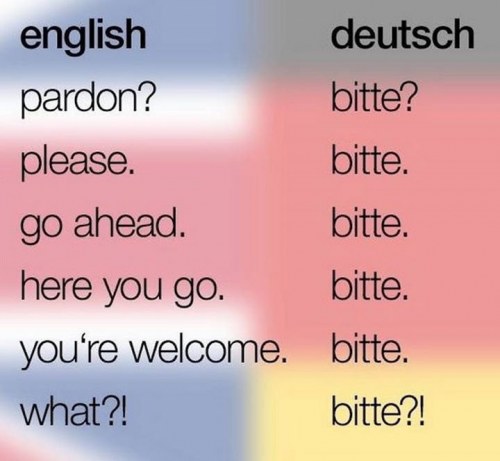 Some of the various contextual meanings of “bitte”. Image from Twitter.

Good looking and available people are everywhere. In my opinion, it’s better to simply do what you want to do, and meet people as you go along.

If you’re looking for where young people hang out, of course, they will be all be visiting Oktoberfest as well. Other young areas of Munich with plenty of bars would be Glockenbachviertel, the uni area, Maxvorstadt, or Münchener Freiheit. There will be plenty of single people around, just quit looking so hard. Now, I’ve heard the stereotype that German women aren’t as approachable as women from other countries. In my experience, this is at least somewhat true, or at least they’re perceived that way. People here are more inclined to hang out with someone they already have a connection with. A mutual friend, roommates, uni programs, etc. Randos walking up are generally not appreciated in bars, but obviously, this all depends on context.

All bets are off during Oktoberfest

While visiting Oktoberfest though, that all changes. At Oktoberfest, a “connection” is often simply that you’re seated together. Still, trying to “pick up chicks” probably isn’t the best way to meet girls…or people. I think the idea is better left on the college campus (or not a thing at all), to be honest. However, generally speaking, no one should have a hard time meeting other people at Oktoberfest.

My first time visiting Oktoberfest was back in 2014 during my first solo travel trip. I was alone, walking to the festival in the morning with my train station kiosk-bought Lederhosen on. I met a couple Australians in line. We came very close to not getting a seat, even though we were so early. Luckily we did, and we met some Germans and Americans at our table and spent the morning with them. I ended up spending the afternoon and evening with a table of local students that just looked friendly as I walked by. Just be open and friendly and the rest will take care of itself. 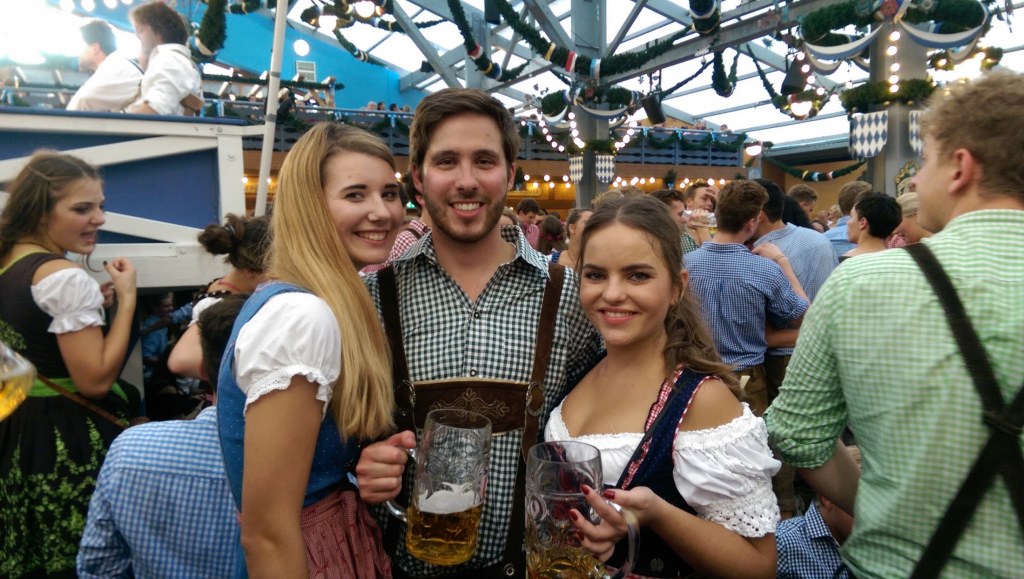 The local students I met and partied with into the night. Not trying to actively meet people, just flying by the seat of my pants through a fantastic day at Oktoberfest. Actually, they initially told me “just one beer” and apparently meant it, but changed their mind after a few minutes :). Just gotta let loose and be friendly!

Paying at Restaurants and Bars in Germany

Okay, okay, no you won’t hit the floor on your fourth Maß. Of course, it depends on how fast you drink, how much you’ve eaten, and a ton of other factors as well. But let’s say you’re there for the whole day. Around 11 am for a beer and lunch all the way till 10 pm or so when most tents close. Unless you pace yourself well, it will be hard not to be quite drunk at that point – so I suggest taking it easy for the beginning. 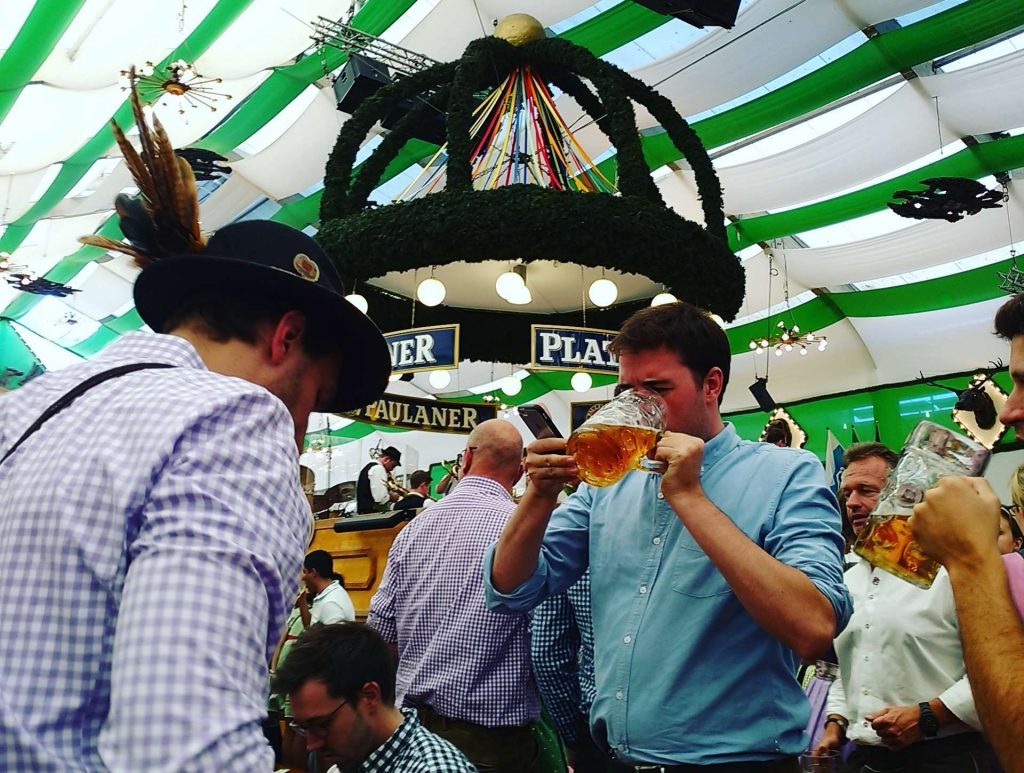 A different kind of struggle bus.

Visiting Oktoberfest is a marathon, not a sprint – really. You’ll probably drink around 5 Maß or so, maybe more depending on how long you’re there. Let’s budget 60 Euro for beer for the day (6 Maß give or take). Then you need money for water (it’s Europe!), and food. There might be free water somewhere, or maybe you can bring some in, but I’m not sure. Rules have changed. Other drinks and water should add on another 20+ Euro. You can eat cheaper outside the tent, but if you leave in the afternoon/evening, there’s a high chance you won’t be able to get back in. The tents start filling to capacity quite early on the weekends especially.

What to Avoid at Oktoberfest 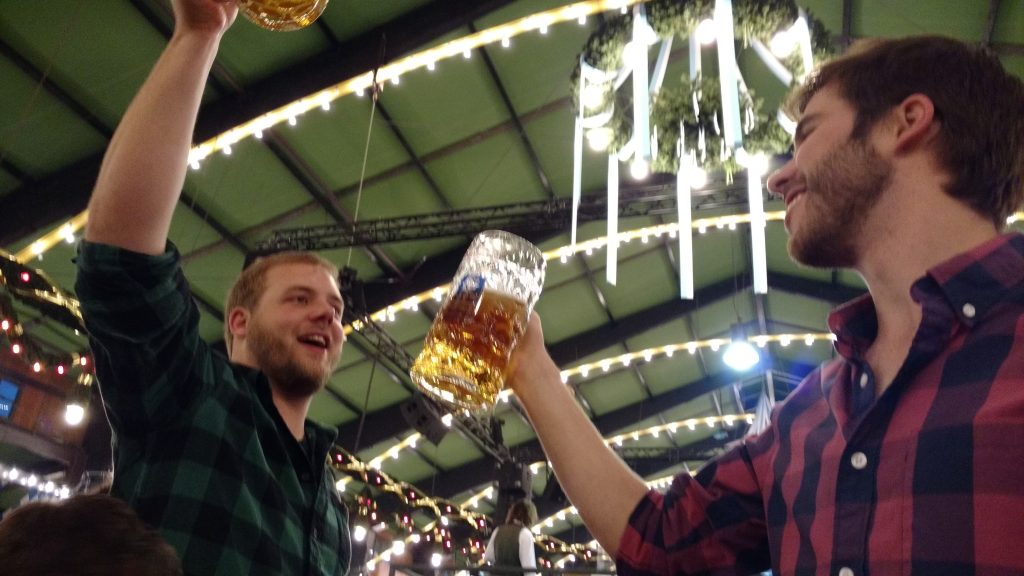 Don’t forget to Prost! When the song plays. You’ll know it when you hear it… 🙂 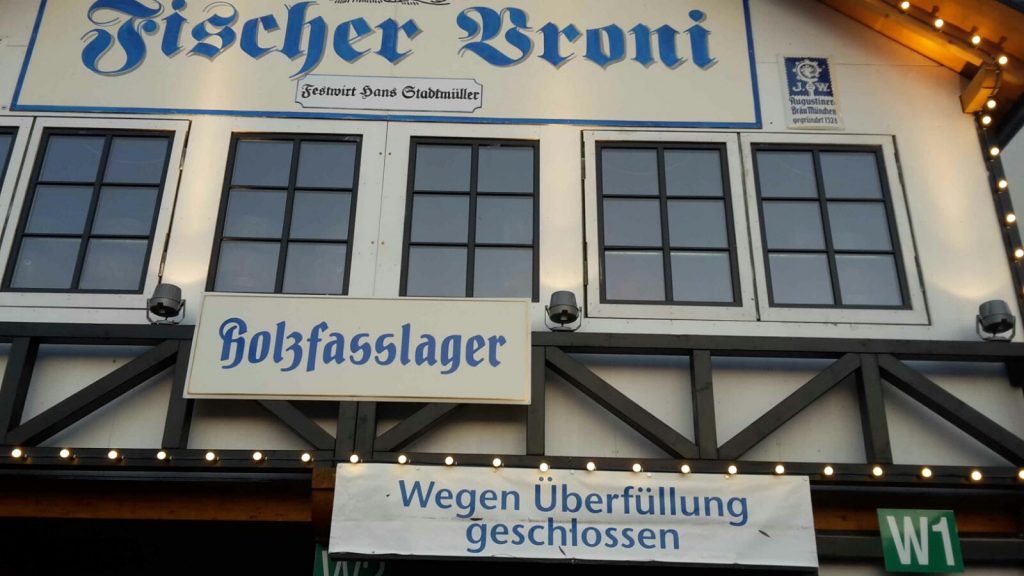 NOOOO. “Closed due to overflow”! boo. Early bird gets the worm, gotta get there early if you wanna get a spot in a tent!

Also, generally the area just south of the train station (Hauptbahnhof) is generally the worst area of the city. I generally avoid this area. It’s not really unsafe at all, it’s just not nice. Shitty buildings, whatever population of homeless that Munich has is there, weird casinos, it’s just not that nice of a place to be. Don’t judge the city on it!

More about Oktoberfest and Munich

I’ve written a bunch more about Oktoberfest and German culture in other posts. Here’s my overall post about Munich’s Oktoberfest if you want a breakdown of the festival, including a bit of history and what to expect when you’re there. And here’s one about that covers the general things about Beer Festivals in Germany as well.

The weather is going to be pretty miserable for opening weekend and the beginning of next week. However, the last couple of years, the weather has been great and quite summery. For the future, here’s a post about Summer in Munich. For some other local things to do in Munich during the summer. And finally, there are tons of things to see in and around Munich other than Oktoberfest! Here’s my post with 5 Things to do in Munich other than Oktoberfest.

Lastly, I would love to meet up for a beer during the festival if you’re in town! Use the Contact page to send me an email and see if we have some time to sit down and enjoy the famous Bavarian “Gemütlichkeit” together. Also, leave a comment below if you have any more questions about all the shenanigans that go down while visiting Oktoberfest! 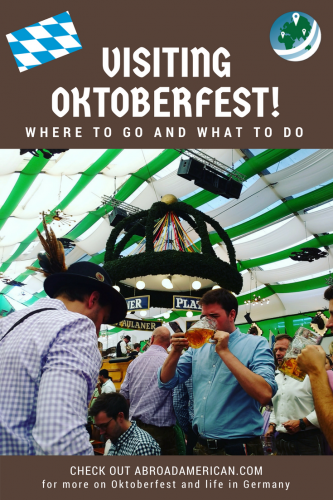