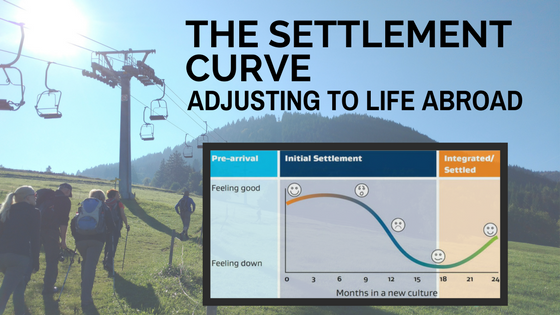 Living abroad can play with your emotions. For a time you’ll feel excited, meeting new people and exploring your new home. But after a while, some expats become overcome with homesickness and question why they moved so far away from what they knew. This is what’s known (in New Zealand at least) as the settlement curve.

I first heard about “the settlement curve” from an episode of the Expat Sandwich that features Mickey Smith, an American artist living in New Zealand. First of all, if you’ve never listened to the podcast, you should. It’s a great way of diving into the issues and emotions related to moving abroad. Listen to this episode on the Expat Sandwich website here: Episode 005: New Zealand with Mickey Smith. Anyway, in the episode, Mickey casually mentions something called “the settlement curve”.

In short, the settlement curve is a way of describing how migrants adjust to a new culture. The curve was developed by the government of New Zealand (official link here: Stages of settling in). I think it was meant to specifically describe how immigrants and expats in New Zealand emotionally react to moving and living there. However, I think it offers some great insights for expats and immigrants around the world.

The Settlement Curve, much like an alpine hike, has it’s ups and downs.

As you can see in the picture below, it seems to illustrate that expats and immigrants tend to ride high for the first 9 months or so. But for the next 9 months, we apparently dive deep into a sort of funk. As time goes on, we slowly climb back up to being happy again.

To me, this seems a little extreme, especially if it’s meant to describe your general mood every day of these 24 months. As in, does the chart mean we should expect to be sad every day from month 12 to 21? I’m sort of playing devil’s advocate here, but only to point something out. I think this chart refers to our emotions regarding the move, not our general emotional state. 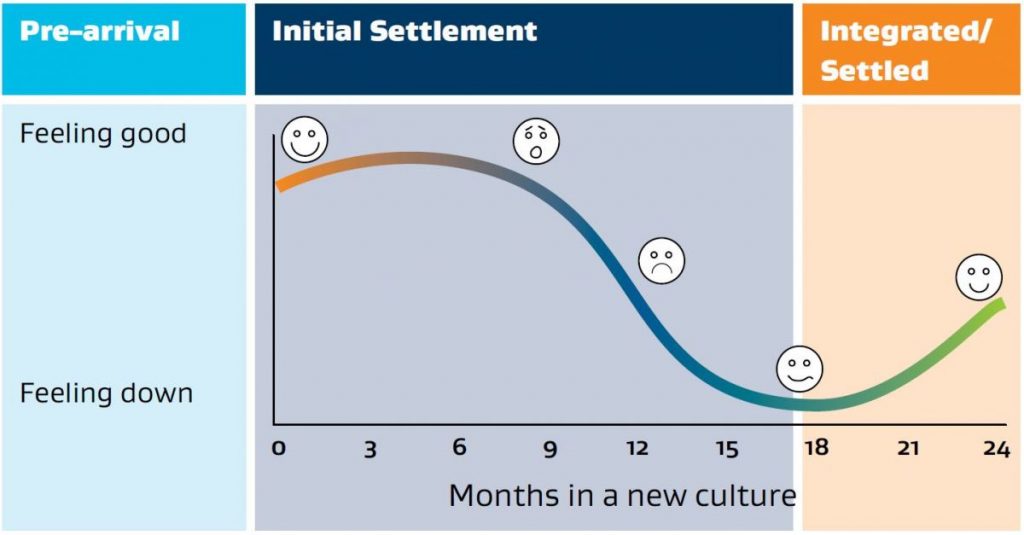 The “settlement curve” that the NZ government developed. Definitely looks like a roller coaster of emotions to me.

I don’t want anyone thinking that every expat or immigrant goes through a 9-12 month depression after moving abroad. Again, I don’t think they meant it in such a hyperbolic way. But it still does seem a little extreme to presume that this is the experience for all or even many expats. They’re probably partially trying to warn the numerous folk who see moving abroad as a “greener pasture” to whisk off to. In that respect, I definitely agree with them.

Is the Settlement Curve Right?

So how does this reflect my experiences? Not so well. As I said before, this curve is really meant for the specific experience of moving to New Zealand. From what I’ve heard, there seem to be parts of Kiwi culture that might really accentuate the highs and lows of the curve. In the episode of Expat Sandwich, Mickey goes on to tell us that NZ just feels a little more disconnected. Of course, it is literally more disconnected, being a smaller island in the massive Pacific. But there seems to be something else that separates it from the pace and goings on in other parts of the world.

Geographically speaking, from Germany it’s easy to go anywhere else in Europe. However, it’s a 3 and a half hour flight from Auckland to Sydney, the closest Australian city. I think that proximity really influences people’s mindset, and that distance from other places really influences Kiwi culture. Maybe it acts like gravity, the closer you are, the stronger that attraction force is. I know Kiwis aren’t disinterested in world events and history, but there does seem to be a “distance” between them and say, the pace of Europe.

So maybe the curve has much more relevance in New Zealand than it would for many other adopted homes for expats. As I said, it doesn’t depict my emotional reaction to moving abroad. However, the settlement curve does reflect the general shape of the learning curve I’ve gone through to understand German language and society. So I do accept that there is some correlation there.

Not Everyone Has the Same Experiences

All that being said – I know my experience doesn’t necessarily reflect everyone else’s, even those also living in Germany. I know there are immigrants and expats here who are homesick or even depressed, questioning themselves and their decisions. Conversely, there are certainly also expats and immigrants in New Zealand who never really fall off that first high.

No one factor can be singled out as the basis for our emotional response to moving away from what we called home. However, there are probably a few very important things at play. Some of these are the situation at “home” before leaving, the reason for moving away, personality types and how we deal with stress, isolation, and anxiety, and of course, the specific circumstances of the place and the life we are moving to.

Okay, okay, yes I definitely know I’m not that “normal”, whatever that means. Hell, what percentage of Americans even leave the country, let alone move abroad? But that’s not what I really mean with the heading. What I mean, is that I know my situation isn’t normal.

First of all, I’m in a very international master’s program. Everyone in my program, except for the few locals, is in the same boat (or rather, freshly off of it). We’re all new here and adjusting to life away from home, in Germany, so it’s easier for us to become fast friends. I also have another advantage. I lived with some great Germans in my first apartment here in Munich. Somehow, one of them ended up liking me enough to date me to boot. That’s always a plus. 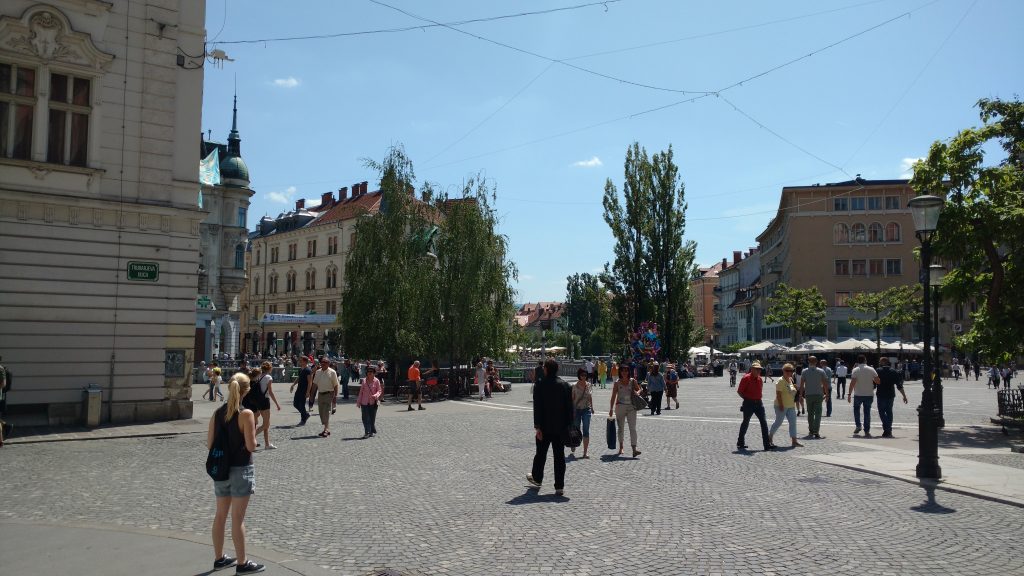 The central square of Ljubljana with the Triple Bridge in the background. And in the foreground, my girlfriend, travel partner, and best friend. She has helped me smooth the ride along the “settlement curve” as I adjust to life abroad.

So now I have her anchoring me to Munich. She’s German, but not from Munich, so there is an aspect of this city being both of our adopted hometowns. Still, having a girlfriend (who’s my best friend) here has really made it much easier to deal with life’s ups and downs. If I wasn’t in my particular program, or if I hadn’t moved into that shared apartment in October two years ago, I’m sure I would feel very different about moving here.

Everyone has their own experiences. If you’ve moved abroad, what has yours been? Leave me a comment below if you have any questions about adjusting to life abroad or the reality of the settlement curve. Or, if you’ve already moved abroad (especially if you’ve moved to New Zealand!), I really want to hear about your experiences adjusting to your new home – please share!