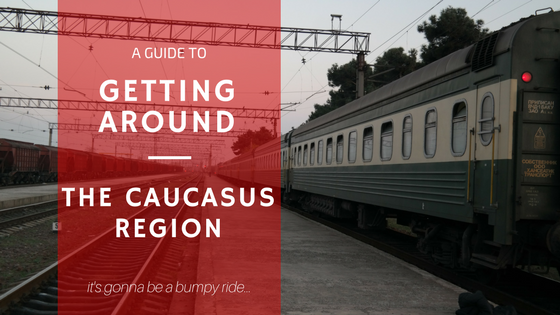 If you follow me on Twitter, Instagram, or Facebook (shameless plugs!) you probably already know that I recently traveled to the Caucasus Region. We visited the three largest countries (other than Russia) in the area: Georgia, Azerbaijan, and Armenia.

Normally, I wouldn’t write my first post from a trip about a topic like this. However, an over-heated, Soviet-era overnight train had me awake and ranting on Instagram at 4 AM. This post is an extension of that initial rant on Instagram. Because we spent so much time getting around the Caucasus region, transportation between our destinations was actually a big part of our experience. This is the very NOT pretty part of traveling to the Caucasus. The actual travel.

I’ll probably write more detailed posts about each big intercity trip we made, just to highlight a particular mode of transport or a particular experience. But for now, I’ll just touch on the three main options available. They all have their pros (okay, maybe not the overnight trains…), but they are also each pretty bad in different ways, too. 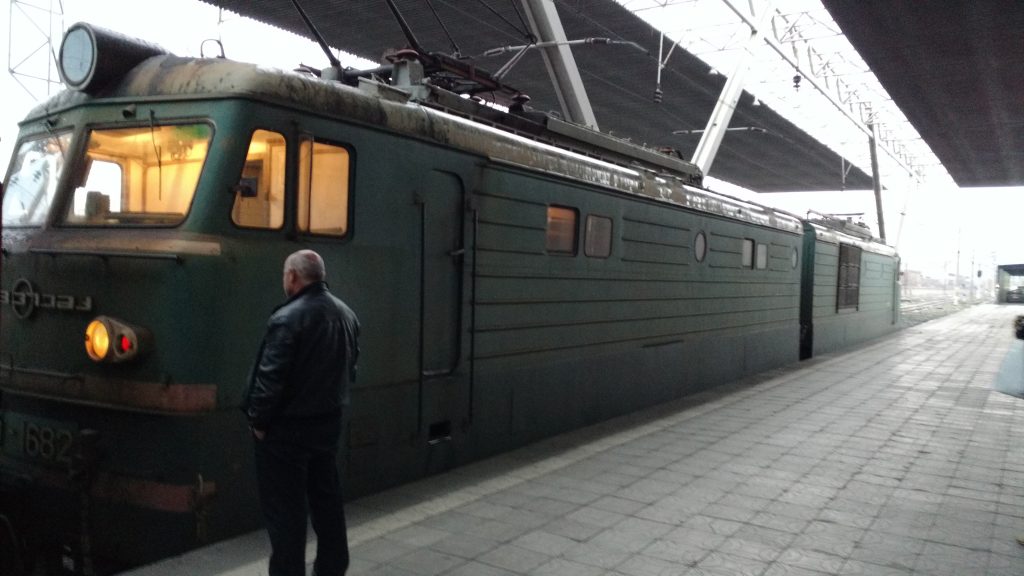 The absolutely ancient locomotive responsible for slowly chugging us from Tbilisi to Yerevan overnight. It did the job… as it has for decades. At least it’s electric! 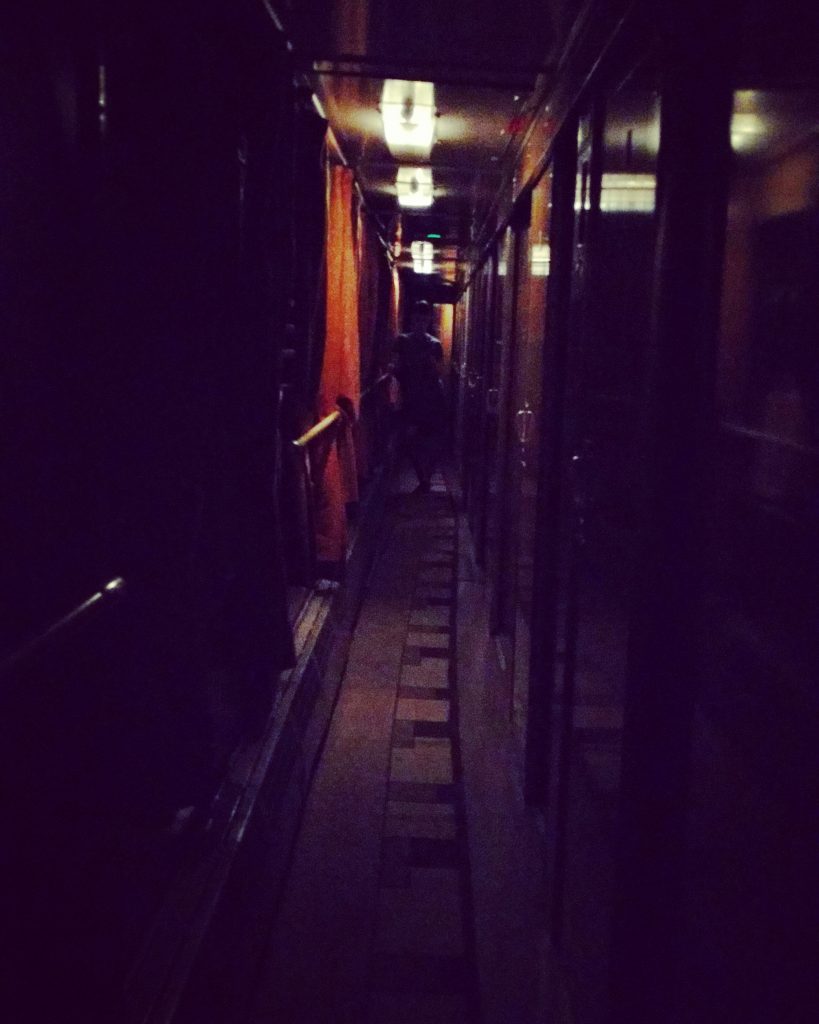 The darkened hallway of the very old, and very, very much overheated cabin car. All the windows in the hallway opened during normal hours, but overnight (essentially the whole ride) they were locked.

The seats and compartments themselves are fine enough (usually), but once it’s night, they close the windows and the heaters turn on… Making your little somewhat comfy compartment into a sweaty hot box. The only refuge to be found was in the little room at the front of the car where the toilet was since its window was understandably left open. The sweaty hotbox of a compartment made it pretty much impossible for any of us to sleep. 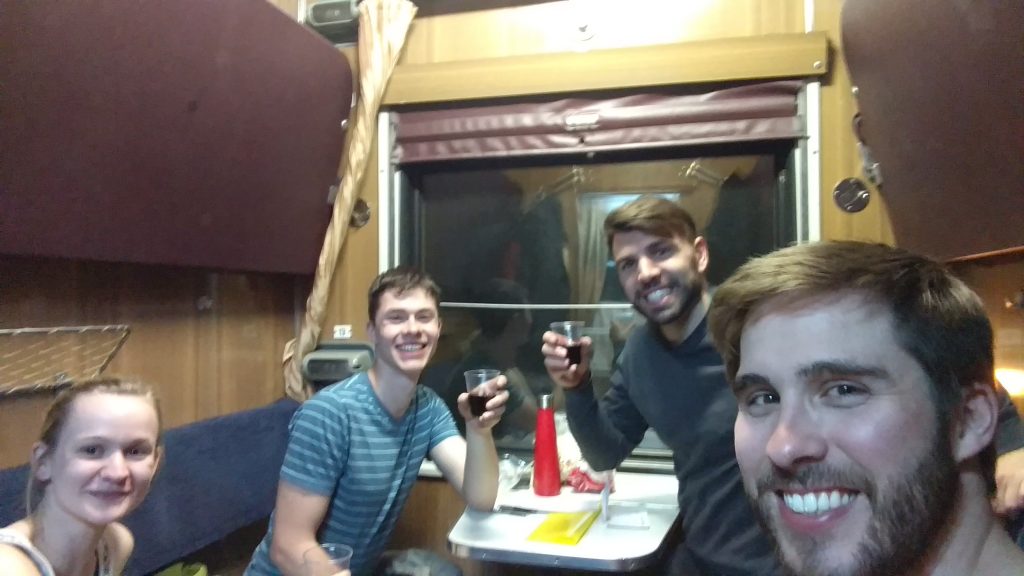 For our overnight train from Tbilisi to Yerevan, we actually got to all sit together, however, this was the deathly hot train. The other overnighter we took was also hot and sticky, but this one was definitely worse. Knowing it would be at least as bad, we got a little wine in our systems to help us sleep… unfortunately, we would have needed to drink a LOT more for it to help.

Getting around the Caucasus entirely by trains like these would be a nightmare. We should have only taken one, but we bought both tickets at the same time before we had ridden a train in the region. Oh well, another day, another lesson learned. Just don’t take the trains people.

Aside from the trains, the other modes of transport are similarly ancient, though with more flexibility and better travel times. Minibusses (marshrutkas) are everywhere, and even bigger coach buses operate between the major destinations. 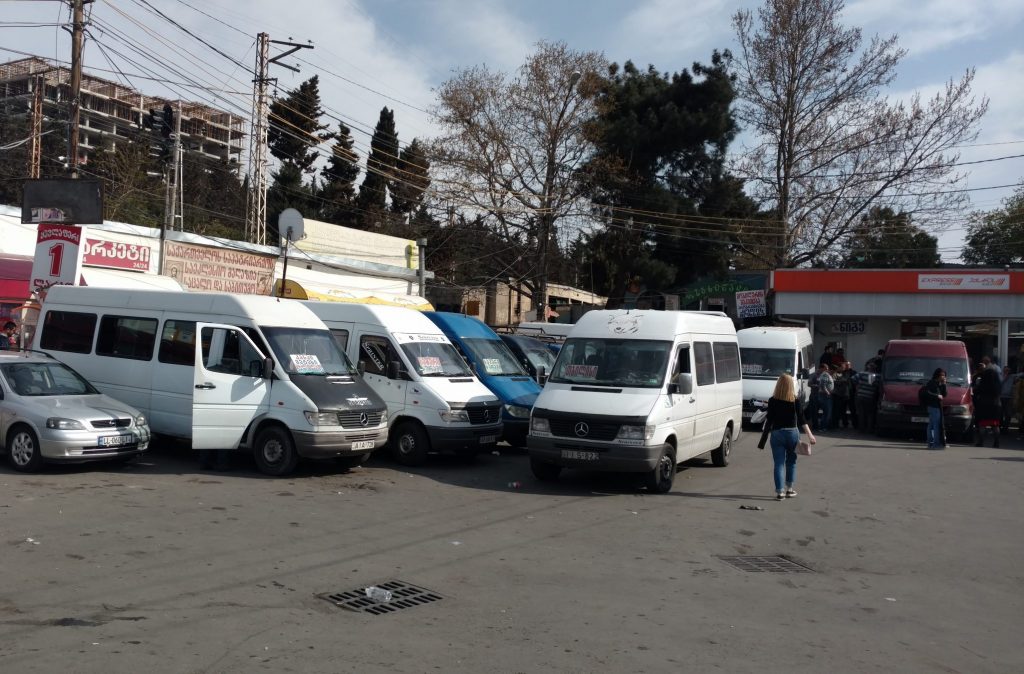 This is your typical “bus terminal” for mini buses in Georgia and Armenia. We had much less “luck” in Azerbaijan, but the stations there were still pretty similar. You basically have to go around peeking in the windows for your destination, there might be a small sign somewhere, that someone put up at sometime displaying the rough times the marshrutkas leave, at that point in time. Best bet is to just as one of the drivers. Be careful of taxi drivers who will sweep you away and take you there, but overcharge you though! Since these Marshrutkas are the most common form of “public” intercity transport, learning how to use them is a necessary skill for getting around the Caucasus.

Good luck finding a reliable schedule to use, however. Some travel websites have current info for some routes, and others have no information. Additionally, these schedules aren’t really hard and fast rules. Drivers leave when the marshrutka is full, after the prescribed departure time. Some routes are less busy than others so expect to wait a bit.

Your best bet is to visit the particular bus station that minibusses (marshrutkas) head to your destination from. Look for any sort of schedule that may be around, or you can ask around for departure times. Somebody might speak English.

Remember though, just like with transport within each of these cities, if you take a marshrutka, be prepared to be cramped and to inhale an excessive amount of diesel emissions. Just like the trains, these things are old. They run on the very dirty engine technology of yester-yester-yester year. 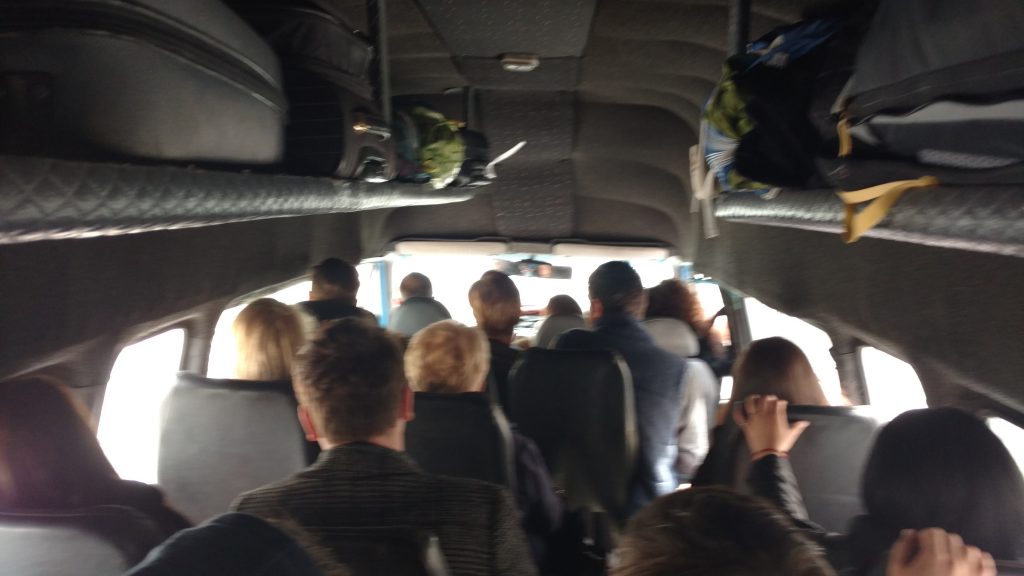 The inside of a cramped Marshrutka. I actually had to stand for this short ride to a nearby area to Tbilisi, hence the blurryness of the photo. Luckily, none of us ever stood on a long distance trip in one of these mini buses, however we definitely got squished together though.

If you’re traveling on a more popular route, you might even be able to take a coach bus to your destination. This was the most comfortable form of transport we found getting around the Caucasus. They have real seats which are generally comfortable, and they drive less erratically than taxis or marshrutkas. 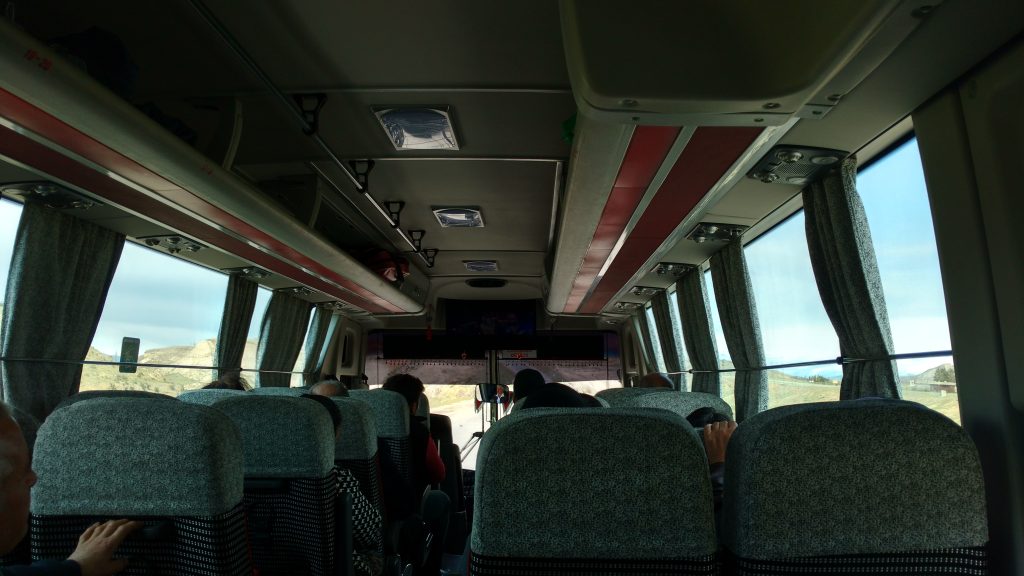 The coach buses were actually the most comfortable way of getting around the Caucasus. We had more space to ourselves on these, even though the price was still just as amazingly cheap as the marshrutkas. Plus the ride wasn’t nearly as chaotic or rollercoaster-y on them. Though it still was a little…

Your third option for intercity transport is booking a taxi. These can either be a private ride for you/your group, or a shared ride. On shared rides, the driver will wait longer or stop somewhere along the way for additional passengers.

Taxis are expensive, though they offer more convenience than any other mode and more privacy. Plus you can ask the driver to stop at the next rest stop/gas station thing if you need to go or pick up some food. Unfortunately, it was hit or miss for us with respect to the drive quality. One of our long-distance taxis was phenomenal. Newer vehicle, comfortable, plenty of space, AC, etc. However, our other long-distance taxi ride was not… more below.

On the very mountainous route from Yerevan to Tbilisi, the four of us rode in a small compact car –  all with our bags, as well as food and drink for the trip. It was tight. On top of that, the driver was… erratic. On normal roads in normal traffic everything was fine, but in heavy traffic or on the pothole-filled mountain roads, it was a thrill ride. For the few hours we spent driving through the mountains, there were very few moments of normal, follow-the-road driving. 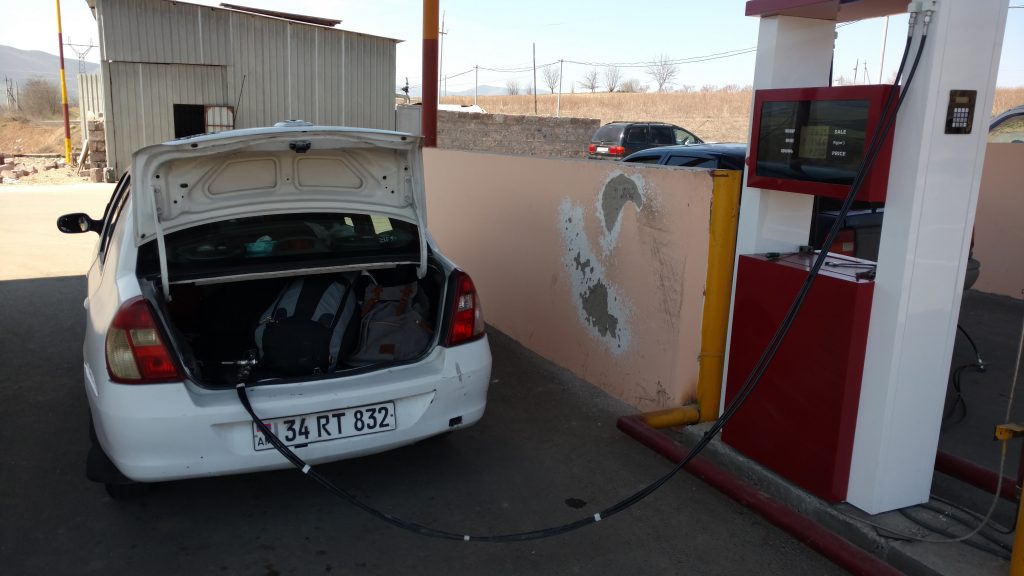 The driver was plenty nice and stopped at a rest stop/gas station to refuel. We had no idea what he was doing when he hurriedly asked us to get our stuff out of the trunk, though… Getting around the Caucasus was full of little misunderstandings like these which made it all the more uncomfortable. We learned to just go with it, sure, you have to worry and be careful, but mostly, just go with it.

This wasn’t entirely our driver’s fault though, as I said these mountain roads were not in the best of condition. In fact, they seemed to be more pothole than road oftentimes. He maneuvered all over the entire road, swerving around one pothole after another in a continuous, but not smooth, weaving pattern.

This swerving was happening while we were traveling at a pretty good speed. On the mountainside. In a pretty shitty car. With terrible music blasting. It was not fun. It’s a toss-up between that overnight train and this taxi ride for our worst experience getting around the Caucasus. 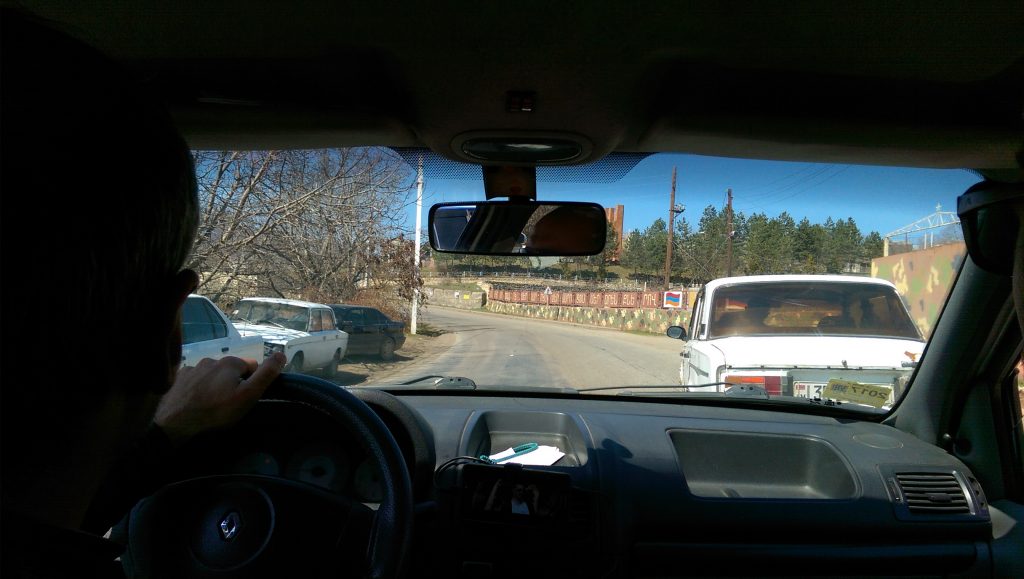 A quick snap of my view from the middle seat during that nightmare of a taxi ride. Here we are passing (on the other side of the road) an even shitter car, a Soveit-era “Lada” – which were completely ubiquitous in the Caucasus. They’re slow, and the spew so much pollution that we could smell them before seeing them when walking through cities.

Getting Around the Caucasus

If you wanted a smooth ride between places – well, you’re shit out of luck. The trains sway from side to side and bounce up and down as if the train’s suspension was a bouncy castle and the car a 4-year-old at a birthday party. The roads vary in quality, but most are in poor condition.

That mountain road from Yerevan to Tbilisi that I mentioned above was the absolute worst, however. To avoid those potholes though, even the coach buses swerved across lanes, completely ignoring any kind of road marking or passenger comfort. Still, they’re probably your best option. The marshrutkas drove as recklessly as the taxis.

I absolutely loved the trip, and all three countries had something different to offer. I’m glad we buzzed around as much as we did. But, I’m also glad that since I’ve already visited, I don’t have to spend so much time and energy just getting around the Caucasus again. Next time I’ll dedicate the same trip duration to just one country. That way I get more immersed in the particular culture and language, and I get to avoid super long, uncomfortable, and probably risky transport.