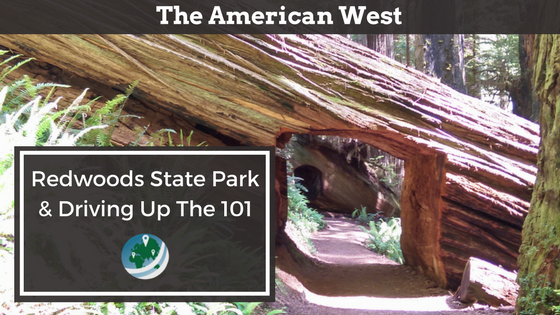 Redwoods State Park and Driving Up the 101 is the seventh post in my “The American West” series about a National Park-themed camping road trip I took in early summer, 2015.

After our short visit to the Golden Gate, we hit the road again and merged onto the 101, headed north. This post is about our day-long drive from that point, up to Patrick’s Point State Park and our day hike in Redwoods State Park the next day. These two parks sit right on the coast in northern California about 300 miles from San Francisco. Unfortunately, I don’t have many photos from this little segment of the trip, but I do have some videos driving up the 101. I’m not sure why, but to this day, I can still so clearly see the highway weaving around through the mountains.

There was something special about this drive. Sure, the landscape was distractingly beautiful, but we drove through such places plenty of other times on this trip. The way the highway curves up and down through the mountains has an almost hypnotic effect. It was less like driving, and more like feeling the car as it gripped the pavement over each hill and through each sweep of the road. Go ahead and watch the video below if you want some idea of what this drive was like. I think it portrays it pretty well, but of course, it can’t really compare to the feeling at the time.

A Pitstop for Beer

During the drive, we realized that one of our favorite breweries, Lagunitas, hails from Petaluma, right off the 101. After a bit of deliberation and shuffling our plans, we decided to make a “quick” stop. The brewery did not disappoint. Being a weekday, it was lightly populated, but that was no matter. We sat, ordered out small beer taster flights, and enjoyed the atmosphere. Lagunitas has some great beers available nationwide. With all breweries, however, the selection at the brewpub is newer, better, and more diverse. It was hard to leave that place after just one little flight, even though we definitely took our time drinking them. It’s probably a good thing, though. Unimpaired driving is a good thing, folks.

Unfortunately, there actually were some repercussions from our delicious draught delay. We lost an hour of sunlight. As a result, we needed to change up our plans. Our original spot for the night was too far now, and we needed to find another campground that we could get to with some sunlight left. Using both Google Maps, maps.ME, and a couple other sources, we were able to locate something that fit our needs. Patrick’s Point State Park. Patrick’s Point sits in between the highway and the ocean, a little north of Eureka, CA.

Boy, we picked an interesting campsite. It looked like something out of Jurassic Park. Giant trees and even bigger tree stumps. Dense and lush rainforest-like vegetation. Little streams running around our campsite. It was a little slice of paradise that treated us well that night.

Our food stocks were running a little low, so we had to scrounge together a meal from the little that we had left. The creation we came up with we named “Camp Nachos”. While they sound a bit exotic, they were really just Triscuits, heated-up baked beans, some veggies, and some cheese. Simple, and effective, but not too much food. We continued to munch on various snacks next to the campfire as the evening drew on. It really is important to keep yourself properly nourished on these fast-moving road trips. Being continually on the move, at times it was difficult to keep a proper stock of food together and cook a whole meal every night. More on that at a later date.

After spending just one night at one of my favorite campgrounds, we had to move along. Cue the morning routine.

Usually, around this point in my routine, I would take a second to look around take in the morning. There’s a special feeling that goes along with waking up in nature, making some coffee, and having no stress from work, family, or almost anything. Just a plan of what to do that day. Man, let me tell you, I highly recommend quitting your job and doing this. It’s really satisfying. Now I know that’s probably not feasible for most of you, but hey. If you get the chance, ya know?

Anyway, after getting lost in thoughts like these, the water began to boil and it was time to pack the Aeropress. Armed with a hot, fresh coffee, we stuck camp and packed up the car to head up to Redwoods State Park. The quick drive flew by with the help of some morning podcasts keeping us in touch with the world. We found our trailhead at the Prairie Creek visitors’ center and the namesake Prairie Creek Redwoods State Park. We chose a short trail, knowing that we had a long drive ahead of us, up to Crater Lake in south-central Oregon. 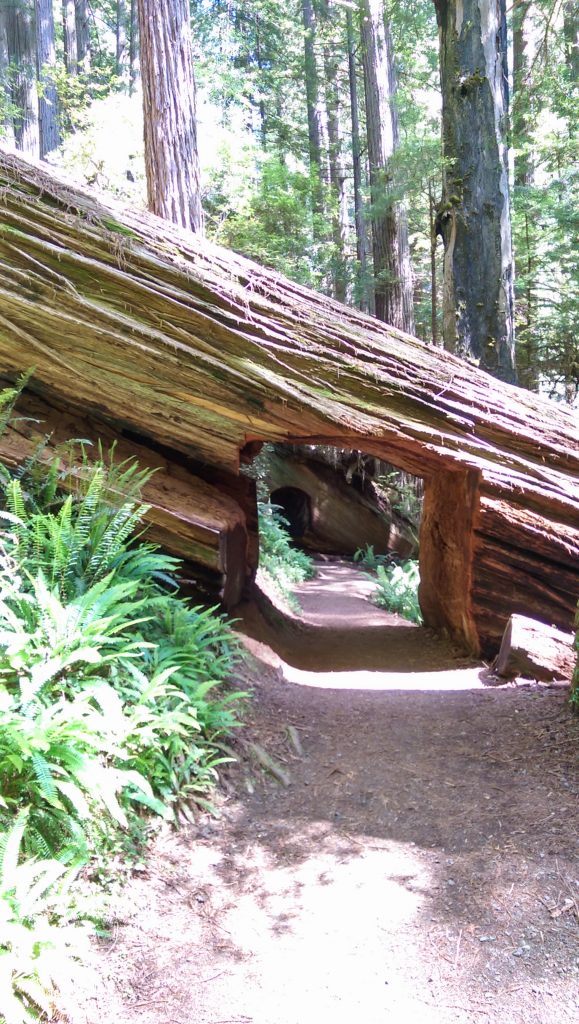 Prairie Creek Redwoods State Park was chock full of gigantic, Jurassic-sized behemoths of trees. This felled tree is a small example. I suppose it would have been too expensive to move from the trail, so they simply carved a tunnel through it.

The hike was short but fulfilling. I had never seen such large single living things in my life. I already described our campsite as feeling and looking “Jurassic”, and this hike just reinforced the appropriateness of that adjective. Hiking through this area seemed like stepping into an ancient era of giants. Or maybe, I’ve been conditioned to think this is what that would look like, thanks to Hollywood. Whatever its source, the feeling was real. This was such a cool hike, and this whole area is unlike any other I’ve been to. If you’re in California, take some time away from the cities and head up to the far North. It’s absolutely awesome. 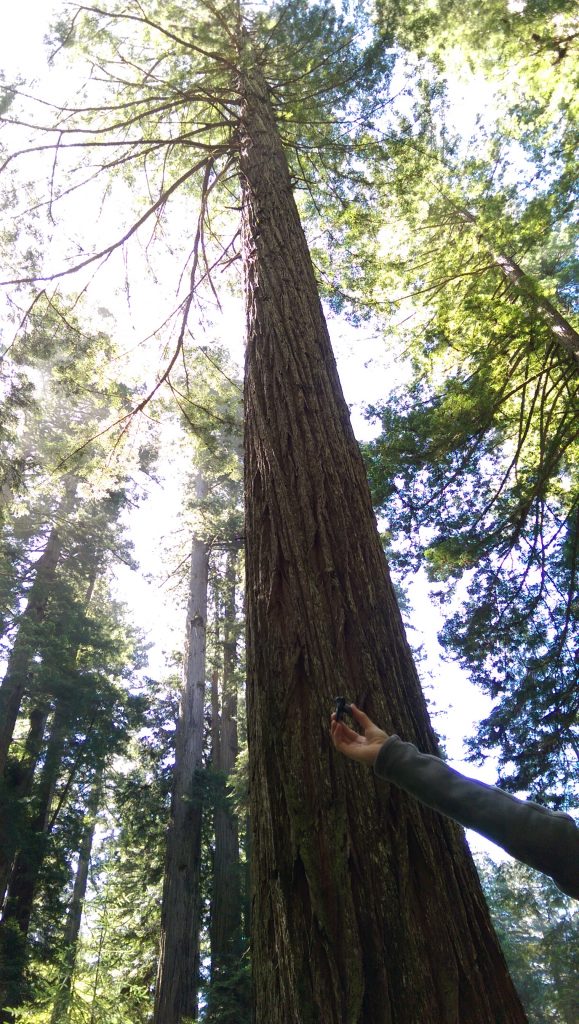 It’s not the best angle, but maybe this can give you a sense of the scale of these trees. Just absolutely giant.

After an hour or so hiking around the State Park, we had to get back on the road to get to the next National Park on the list. Crater Lake National Park was still 4+ hours away, and we needed to set up camp there, too. It really was a shame, so I’ll have to visit this area again someday,to really explore this giant-sized corner of California.