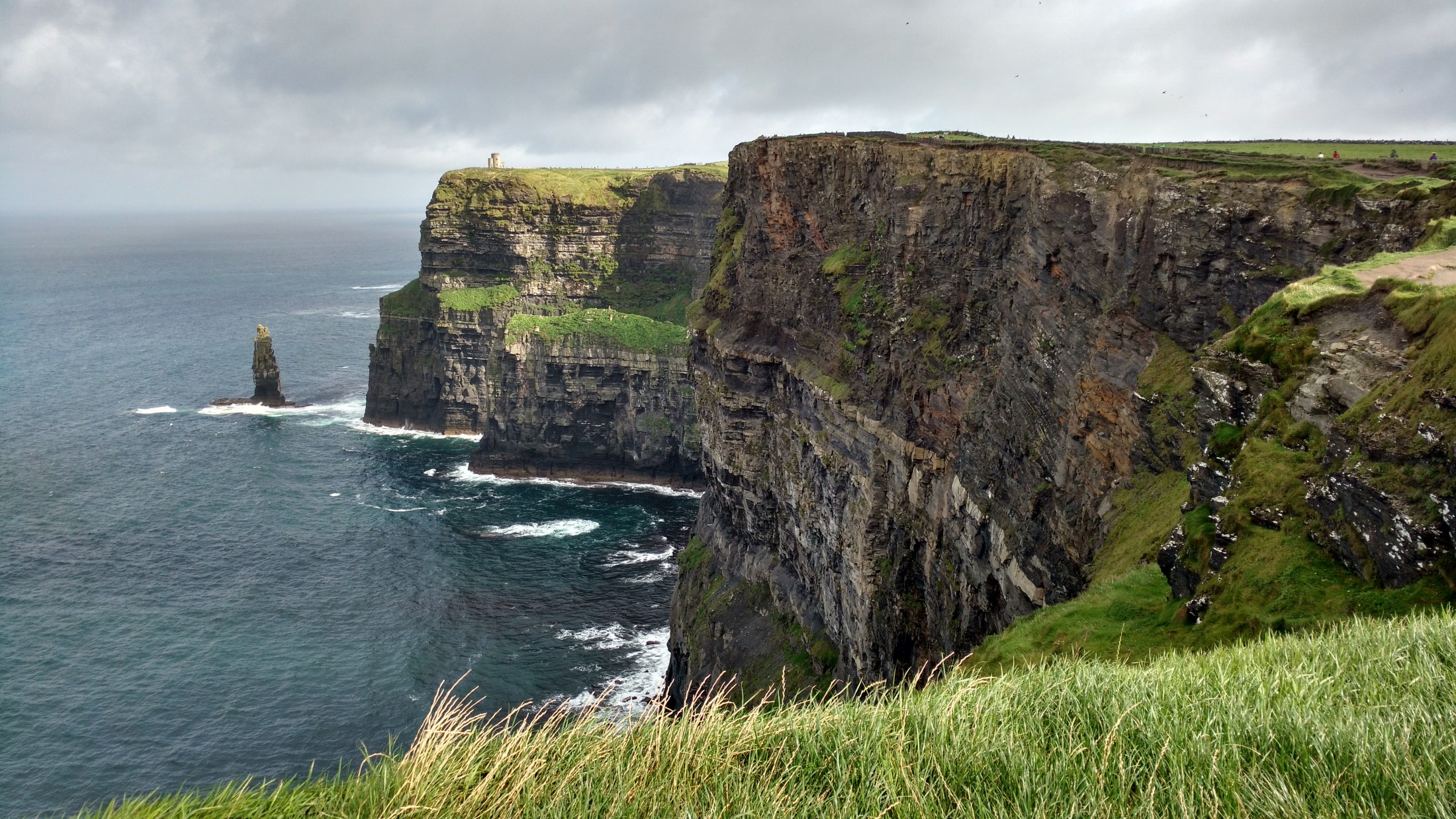 Of all the sights in Ireland, the Cliffs of Moher are probably one of the most well-known. They tower over the water on the western coast of the island, forming a stark edge between land and sea. To put the picture below into some perspective, the cliffs are over 700 feet above the water at their highest point. Shiiiieeeet. I can’t imagine what the view from a boat on the water would be like. A quick phone shot of the Cliffs of Moher. When the sun’s out, and probably even when it’s not, it’s impossible to take a bad photo of them.

The Cliffs of Moher

As we were on a long bus tour, just visiting the Cliffs, we didn’t have too much time to dawdle. Since the cliffs are so visually captivating, time flies when wandering along the muddy trail. We climbed up the main side of the path for the best views first, and then quickly hustled down it to get a quick view from the other side. Instead of writing a bunch of boring paragraphs, I’ll let the photos do the talking, and limit myself to captions below them. There’s not much need for words anyway, this place is popular for a reason. Just after getting off the bus, I spotted this black bird atop the sign pointing to the cliffs. Perfect placement. 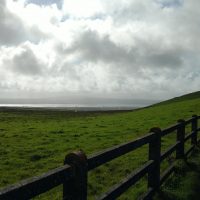 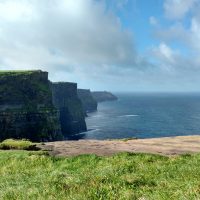 Our first view of one side of the Cliffs. We weren’t too far up at this point, this was just the (beautiful) beginning. 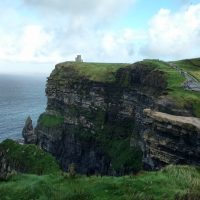 As we trudged up the muddy path and past other eager visitors, we began to find more and more photo opportunities. 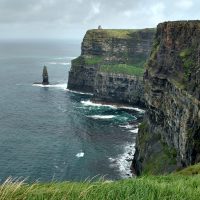 This was my favorite view of the Cliffs from our short little hike. I’ll let the next few pictures do the talking for me. 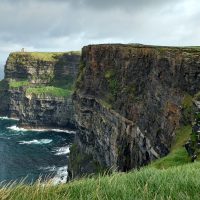 Another of my favorite photo spot. Seriously, the Cliffs of Moher are WELL worth seeing in person. 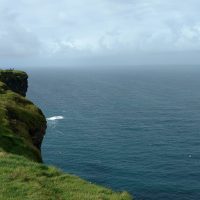 Panning to the left of my favorite spot, I got a sense for how precipitous the drop from the cliffs actually is. Can’t even see the side of the cliffs from here! 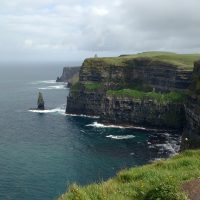 We climbed even higher in the hopes of even better views. While this view certainly isn’t bad, I liked it with one cliff face much closer so that some detail could be seen. 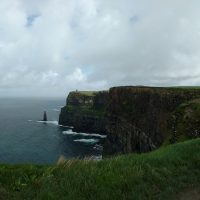 The obligatory, “I’m in deep thought looking over this beautiful natural wonder” photo. Make fun of me all you want, I deserve it for posting this. 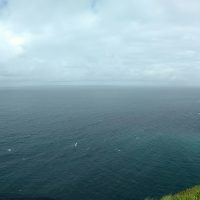 A panorama of the highest/farthest point of our hike up one side of the path. These views are too much to capture with my phone’s camera! On the other side of the path from the 700 ft. tall cliffs, is picturesque Irish farmland, with no hint of the edge of the world 10 yards away. 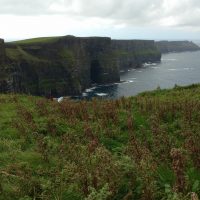 We quickly sped back down the path in order to get a little time hiking in the other direction for a different perspective. Another beautiful sight. What a surprise! 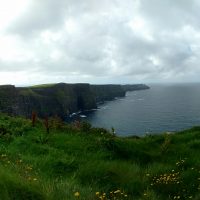 A panorama of the other side of the Cliffs. What you’re seeing is what we hiked along during the first side of the path. 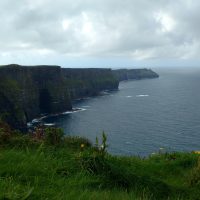 One more for good measure. Green and blue seemingly go well together. Huh. 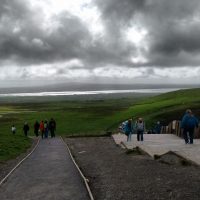 I quickly snapped this dramatic shot of the sky and countryside next to the cliffs. It wasn’t that sunny, but the clouds were thin enough most of the day to allow for some cool lighting.

More (rockier) Cliffs, and the Ruins of a Church

After leaving the Cliffs of Moher behind, the coach continued up the coast for a short while before stopping for another photo op. More cliffs. These cliffs were devoid of the grass that covers the main attraction. Also, they weren’t quite as intimidating as the originals, but damn they were still worth the visit. There were no paths or guide rails here, just a bunch of rocks piled up, high above the water. Once we had finally had our share of cliff photographs for one day, we continued on with the tour. The next stop was the ruins of an old church, out of repair for quite some time. There were no closed off areas of the ruins. It was a little eerie inside, and I’m glad we stopped. I don’t normally like organized tours like the one I was on. Fortunately, I enjoyed this one and each of the stops we made along the way. My photos from these last two stops are below. 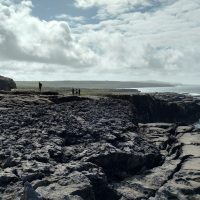 Because of the lack of vegetation, this set of cliffs had a distinctly more primitive or even alien look than the green Cliffs of Moher.

Those guys taking a picture over there really shouldn’t trip. Doesn’t look like a fun fall. 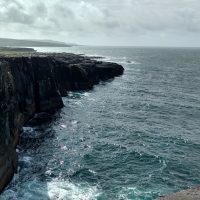 Just another pretty picture of some cliffs. Last one, I promise! 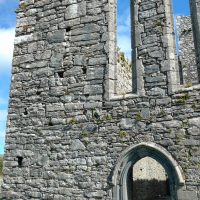 The ruins of a church from the Middle Ages in Ireland. The roof’s long gone, but, the walls are mostly in tact as well as other stone structures. The inside of the church. In places like this, I often imagine all the people that must have stepped through this place when it was whole, and what their lives were like. Too serious? Sorry not sorry. 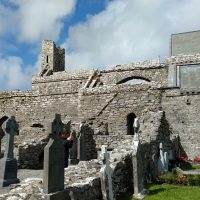 Exiting through the side of the church, I came out into the graveyard area, with a great view of the structure. 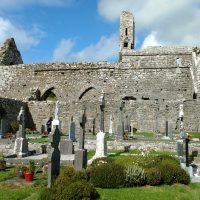 And one last one of the ground around the church, with it in it too. The clouds had cleared by this point and the sunny backdrop made quite the juxtaposition to the ruins of a church.