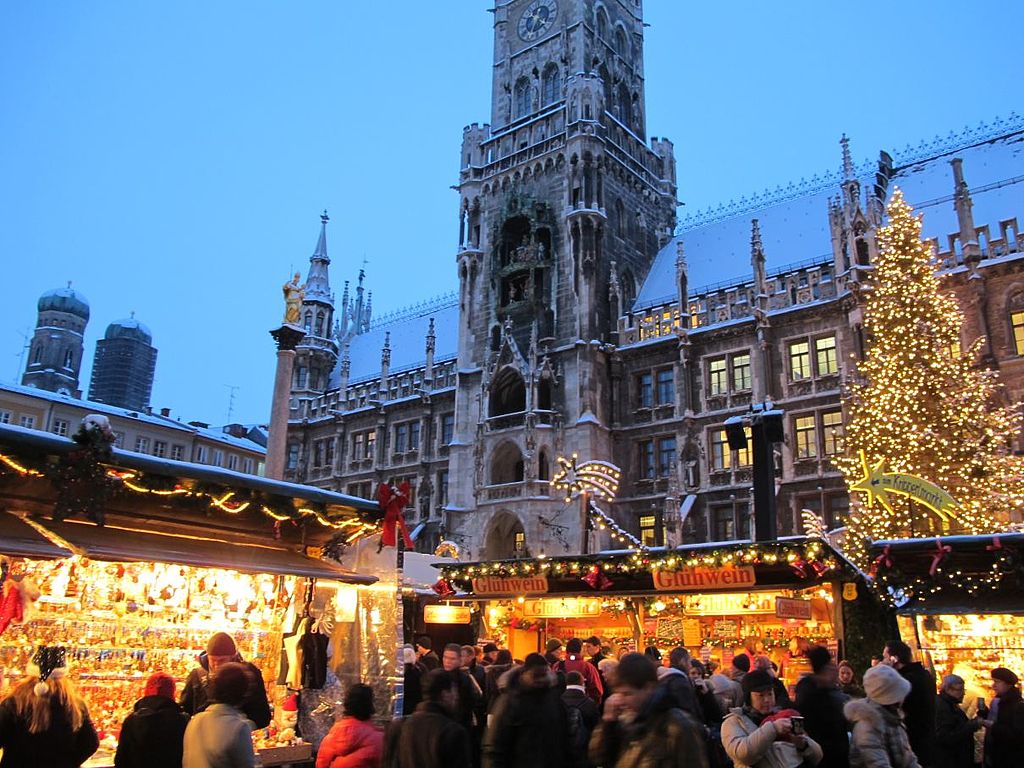 It’s winter in Munich. We’ve had our first couple of snows, several overcast and cold days, and some of those brisk, bright, and clear winter days. Plus, the Christmas Markets are already up and the Glühwein is flowing. So now that the cold weather has set in, what is there to do in Munich? 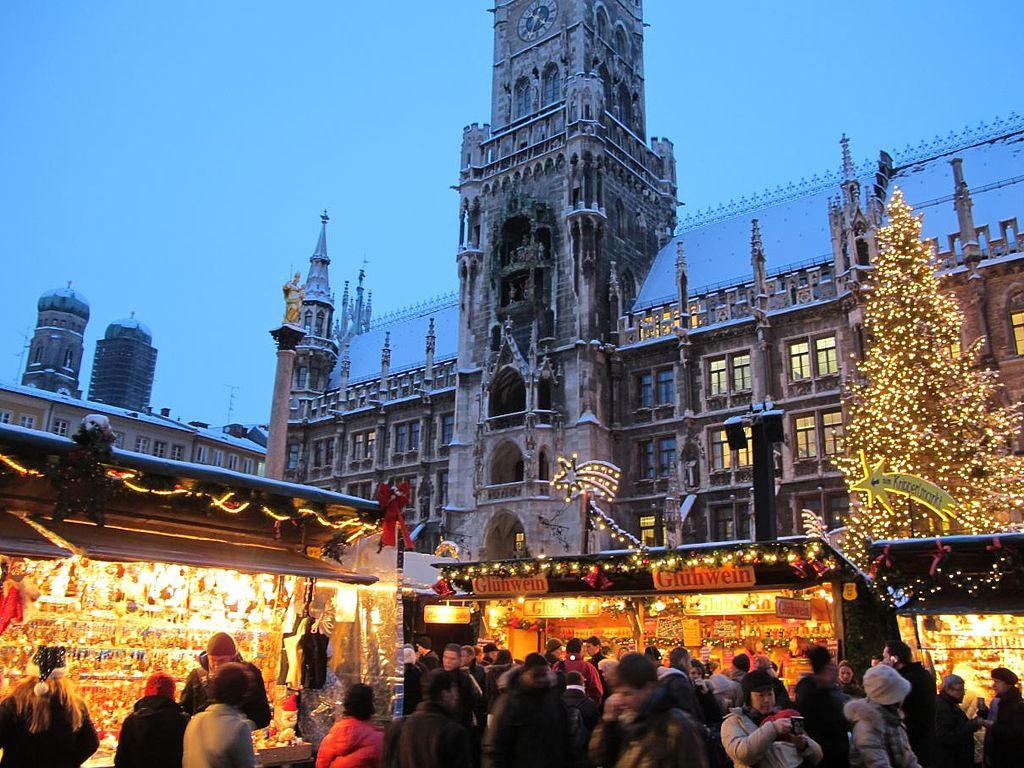 The Christmas Market at Marienplatz, the central square of Munich. This market stretches all through the pedestrian shopping district of Munich. Photo Credit: User: Bbb at wikivoyage shared [GFDL (http://www.gnu.org/copyleft/fdl.html)], via Wikimedia Commons

Winter in the city of Munich has but one outstanding tradition. Christmas Markets, or Weihnachtsmärkte, are a tradition throughout Germany but are especially central to Bavarian culture. If you’re not familiar with the markets, they’re outdoor shopping areas with a mixture of drink stands, food stands, and mini-shops selling various wares. Maybe the most important part of the Christmas Markets is the Glühwein (in English, mulled wine).

Glühwein is not only important to the markets, but to winter in Munich and the whole of Germany in general. Red wine or sometimes white, German or otherwise, forms the base of the drink. Many recipes suggest a good dry and fruity red wine. However, because it will be heated and spiced, the finer elements of the flavor are going to be a bit obscured. The second major ingredient is both fresh orange juice and slices of oranges. The final liquid ingredient is rum. Yes, rum. A surprising amount of rum is added to the mix to give Glühwein quite a kick. I would recommend dark spiced rum to complement the flavor of the drink, but again, I’m not sure how much of a difference it could make.

As for spices, most recipes include a couple of cinnamon sticks, a couple cloves, star anise, and some sugar. I would probably also add some grated nutmeg in there for the holiday flavor. It’s Christmas in a mug, and clearly a much better drink than eggnog. No winter in Munich is complete without making a homemade batch or stopping by one of the Christmas Markets for some Glühwein.

As with any major northern city, in wintertime Munich transforms some of its public spaces into ice rinks. The city’s website has a great launching page for Winter Sports in and around Munich, which includes a list of the various places set up for ice skating in the winter.

The most central location would be at Stachus, a central station for U-Bahns, trams, and the beginning of the pedestrian shopping district. Here’s the website for that particular location. Other large areas for ice skating are Prinzregentenstadion and Olympiapark. The last three links are only available in German, so you’ll have to navigate the sites by guessing what some things mean. 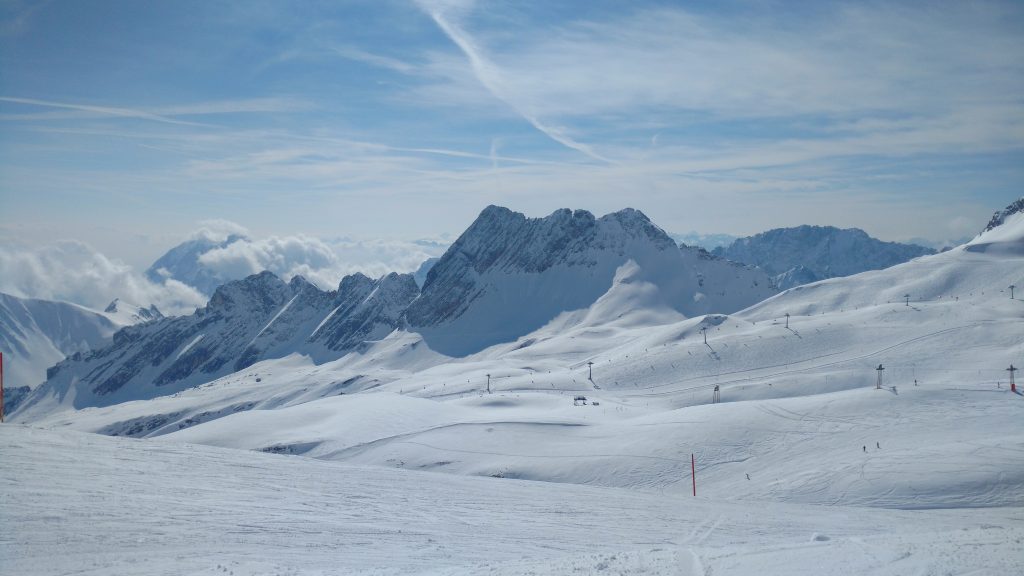 Another view of the whole Zugspitzplatt area from the top of the Sonnenkar lift.

Of course, winter in Munich wouldn’t be complete without skiing. With the Alps so close, being able to ski or snowboard is practically a requirement of living here. In fact, Germany’s highest peak, Zugspitze, is only an hour and a half by train from Munich. Though it isn’t actually that tall, coming in just under 10,000 ft., Zugspitze has great ski runs, great snow, and breathtaking views. From any of Munich’s S-Bahn stations, you can purchase a Kombi ticket which covers you for a day of skiing.

The ticket costs around 50 Euro and includes round-trip travel all the way to the summit and a lift ticket. You’ll have to transfer to the Zugspitzbahn at Garmisch-Partenkirchen, the base of the mountains. It’s the special train running up the side of the mountain, and through it, on a gear and cable system. Short of lunch and Après-Ski beer, the Kombi ticket has everything you need for a great day of skiing!

If you want more information, I wrote a post back in June about skiing at Zugspitze, so take a look!

The winter climate in Munich is comparably mild. At least when compared to the Midwest. Temperatures aren’t quite as low and there has been less snow in the past few winters. Other than the three simple things I listed here, there’s plenty to do if you’re visiting during the colder months. The general atmosphere is very warm, welcoming, and almost joyous this time of year. I’d be willing to bet that may have something to do with the famous Bavarian Gemütlichkeit, or friendly, warm coziness.

So put on your winter jackets, your knit hats, and your gloves, walk over to the nearest market and grab a Glühwein. Pop over to the nearest pub, and shelter from the chill outside with a beer and some warm atmosphere inside. There are pubs and traditional beer halls all over the city and of course, there’s one at the summit of Zugspitze. Just take some time to enjoy the season.