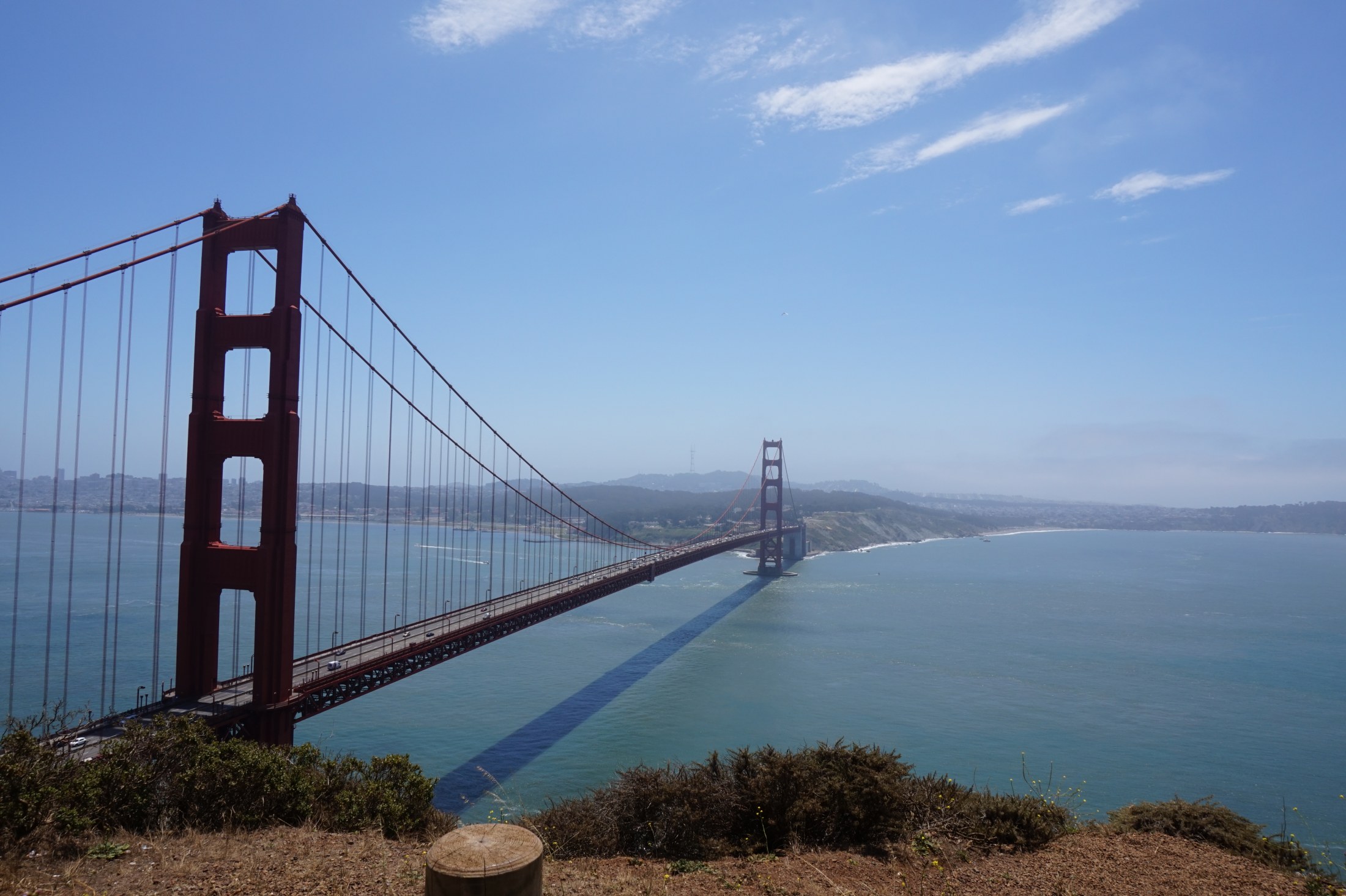 Oakland and San Francisco is the sixth post in my “The American West” series about a National Park-themed camping road trip I took in early summer, 2015. Warning: In this post, I talk about accidentally hitting an animal while driving, if you don’t want to read that, scroll down past the picture of my car. 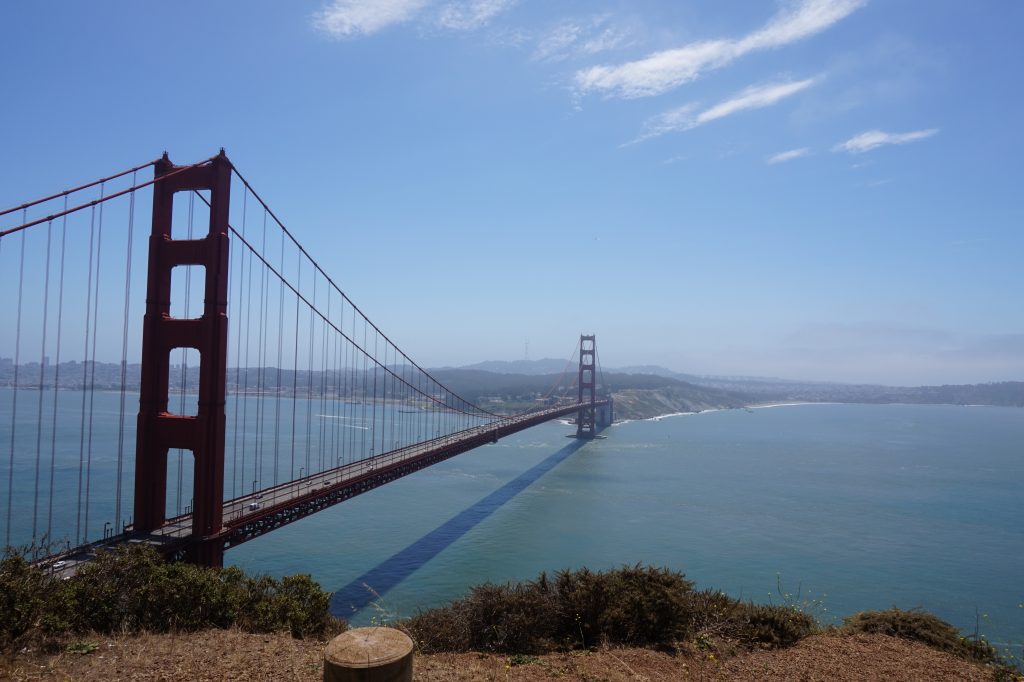 The last sight we saw leaving San Francisco before heading north up the 101.

Our initial drive to the trailhead in the morning had taken much longer than expected. So, as we were driving back through the park on our way out, the sun dipped below the mountains, and it became dark. Dense forest bound either side of the winding road, and I was in constant fear of deer or other animals jumping out in front of the car.  We made our way through the park, taking it slow and constantly switching gears, adjusting to the road. I only switched the brights off for oncoming cars. I kept my eyes peeled the entire time, scanning the sides of the road for movement. Luckily, because there was no traffic, this stressful drive didn’t last as long as the drive in. Forty-five tense minutes later, we emerged from the forest at the Tioga Pass entrance to the park and drove out unscathed.

The drive through the pass seemed much easier. While the road was steep, the forest had subsided and now barren mountainside and steep drops bound the road. I was definitely more at ease driving along a thin road with a simple guard rail than through the dense forests of Yosemite. I only needed to keep the car in 2nd or 3rd gear and occasionally brake to control the descent.

Out of thin air, something jumped out from the brush along the mountainside. My eyes had been on the road, but it was dark and I only saw it as it sprung out from the brush. I immediately jammed my foot down, braking as hard as possible. Time slowed as we neared the dark figure ahead. Luckily my brain passed over the idea of swerving out of the way. To the left was steep mountainside and to the right was a sheer cliff. I soon began to realize there just wasn’t enough road between the animal and the car.

We struck it with the front-left of the car it as it entered the lane. She had been screaming, I only just noticed. In the moment, I had instinctually swung my right arm in front of her to stop her from moving forward. We came to a stop shortly after, and she stopped screaming, I finally took a breath.

It was a bear, a black bear. Shit. It wasn’t very old either, definitely not fully grown. I thought about momma being around, but I went in and checked it out anyway. I’m not sure if that bear lived or died, but at that moment, he wasn’t moving. I dared not get that close. I quickly got back into the car and continued driving, looking for a place to pull off the road and to make a call about the accident. About a quarter mile down the road, there was a truck turn-around, and I pulled in to calm down.

No signal. Of course, there hadn’t been any in the Pass that morning. I remember Google Maps adjusting. We decided to drive down through the rest of the Pass and notify the ranger station at the bottom. The rest of the drive was uneventful, but the atmosphere was tense anxious. We got back to camp still a bit frazzled and very tired.

Google Streeview of Tioga Pass. This is what the road looked like in the area where we hit the bear. No options left or right.

The next morning we decided what to do. The damage on the car worried me too much to not get it fixed ASAP. We had to cut our visit to the park short and drive through to Oakland and San Francisco for some the repairs on my car. It really was a shame because we only got a chance to see one little sliver of the park and had plans to see so much more. Oh well. The drive down from the Sierra Nevada mountains wound through the foothills all the way to the coast.

Remembering that drive, still over a year later, brings back one strong image to my head. Rolling hills covered in dusty, dry, dying grass. Mind you, this was June of 2015, the middle of a severe drought in California and the West. Still, the hills seemed so barren and the sight was so far from what I expected of the drive. 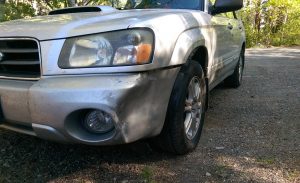 There may have been wildlife involved in this accident… Maybe I’ll tell the story another time.

Driving to Oakland and San Francisco

We had planned to stay with a friend of mine in Oakland, and we arrived just as he was getting home from work. He had some evening activities planned (I think Brazillian Jiu Jitsu actually), so my travel partner and I had some time to relax. Naturally, the nearby pubs and bars along Broadway Ave. and Telegraph Ave. drew us in.

We hadn’t really had an ability to drink a few without having to drive after, so we imbibed a good few of the local craft brews hopping from bar to bar. A mixture of finally being able to relax, spending so much time together and seeing so many wonderful things together led to a seemingly inevitable heart-to-heart conversation about our lives. The early evening on that dry summer Oakland day will stay with me for a while. By the time we had gotten a decent buzz on, my friend was done with Jiu Jitsu and we went back to his place for some food and more drinks.

The next day we drove across the bay to San Francisco to get my car fixed up and for a bit of a day trip. I dropped her off in an area where she could scout out some sights and cool stores to visit while I drove to the repair shop. This is my favorite part of the story. From Yelp, I picked out the first place to get a quote to fix the damage. I found Call Car Collision San Francisco (Yelp page), an auto repair shop with great reviews and not too far from where we were. 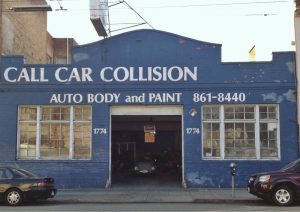 The repair shop in San Francisco that fixed the damage on my car!

I pulled into a nearby spot and walked across the street to ask if they had time to see my car. To my surprise, they agreed! A worker helped to guide my car into the rather full and busy garage. A good sign. An older man, who I believe was the owner of the shop (Claudio?) came over and talked with me about what happened. I explained that we hit an animal while driving and that I wanted the dent pulled out. But more importantly, I needed the wheel well fixed or stuck back in place. It had been rubbing up against the wheel during some turns.

As we talked about the car, he sauntered over to his tools and began working. Soon after, he was working with a heat gun, a crowbar and a rubber mallet to pop the dent out. All the while he was casually talking with me about what I was doing in San Francisco with an Illinois license plate. As I rambled on about our road trip and surely bored him with details, he got to investigating and fixing the wheel well issue. He ended up cutting out the parts which had stripped off of the rubber and were interfering with the wheel.

The rest he hammered and pushed back into form so it stuck in place while driving. Before I knew it, about 20 minutes in total maybe, he took a final look at his work, slowly stood up and told me he was done. Stammering, I awkwardly and shyly asked about payment. I fully expected this unannounced visit to cost me a decent amount. He simply declined payment. My instincts forced me to offer payment again. I needed to somehow compensate this man in his oil and grease-stained jumpsuit for helping me. He declined again. In exchange, he wanted me to spread the word about his shop in any way I could. I suppose this post and a Yelp review are my ways of repaying him.

After repairing the car, I drove off to pick up my wonderful travel partner again and grab some lunch. Cue the unavoidable visit to a small taco restaurant. Absolutely delicious. We went to the pier and saw the seals, I picked up a rain jacket that I had been sorely needing, and we generally explored tourist San Francisco. That night we got dinner with my friend at an all-you-can-drink Sake Sushi restaurant in Oakland.

The next morning, we embarked on our way. We picked up some coffees (of course), and drove through San Francisco one more time before hopping on the 101 towards the Golden Gate. 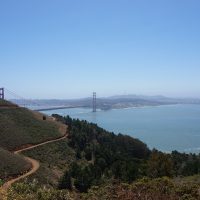 We drove up the road a bit to get back to the 101, and I snapped this beautiful view quickly. 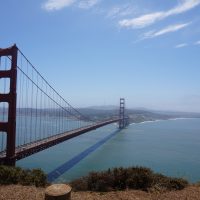 What a beautiful sight it actually is. Highly Recommended! 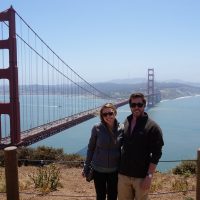 Traditional Golden Gate photo. It was a bit windy though XD

After doing what we all have to at the Golden Gate, taking pictures, we continued up the 101 towards Petaluma and onward to Northern California. This post is already far too long, so I’ll pick up the story here in my next The American West post!