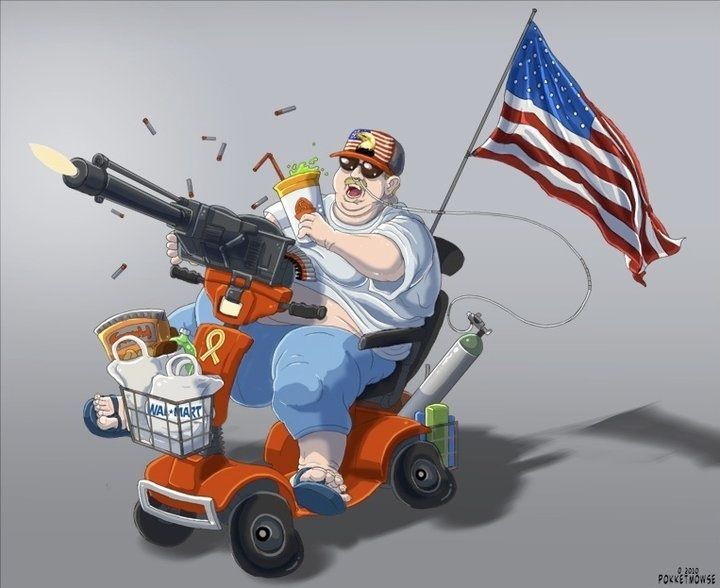 Warning: This post is about American stereotypes abroad. As such, vast amounts of over-generalization are ahead! Please, know that I don’t believe that all Germans or all peoples believe in these stereotypes of Americans. I’m just repeating what I’ve encountered naturally, and the responses people here have given when asked what they think the typical American is like.

Yes, this is what everyone back home is like. I swear guys, it’s totally true. Image Credit: 2010, Pokketmowse Imgur (I tried to track down the original, no luck.)

Anyone from the States who’s traveled to Europe has likely come into contact with some American stereotypes. The American stereotypes in Germany are pretty much the same as I’ve found elsewhere in Europe. The overarching theme seems to be that the people of the United States are a self-centered, superficial, arrogant, and inconsiderate bunch of idiots.

They seem to think that every American goes off to patriotic target practice every evening and eats 3 Big Macs afterward. This all is before the nightly homicidal shootout with our trigger-happy police, of course. They think we hate poor people, black people, and generally those different from us. Germans tend to believe that Americans are “uncultured” and that we rarely travel outside our borders or experience other places. They think we all drive Hummers and love to road trip on Route 66 singing along to Country Road whilst drinking piss-poor beer.

If I ever encountered anyone who believed all those things, I would simply say “Cheers!” and pretend to be English. There’s no convincing some people, and they’re just not worth your effort. Luckily most Germans don’t actually believe these things about individual people. I’m sure their minds conjure up these stereotypes when thinking of the country as a whole. Naturally, I don’t agree with them, however, some are more true than others. Some of these stereotypes have merit, and some do not. Most are exaggerated, though.

Let’s not get all down and out – there are some positive American stereotypes too! Many people could also believe (possibly with some cognitive dissonance) that Americans are generous, hard working, and informal people. After visiting the States, many come back surprised that people will simply talk to you in the store or at the bus stop (if you’re in a metropolitan area…). Many Germans I’ve met have also noted that they think Americans are pretty optimistic, too.

I won’t be going through each of these stereotypes here. Instead, I want to open up a discussion with my fellow abroad Americans about they stereotyping they have faced while here in Germany, Europe, or anywhere else in the world. So.

What type of American stereotypes have you encountered while traveling or living abroad?

How did people reveal these stereotypes to you?

How has seeing their view of Americans affected you?

OR, if you’re not American:

What are some of your stereotypes of Americans, and why do you think you have them?

What do you think Americans think of your country?

I’m looking forward to your input, and discussing your experiences with American Stereotypes abroad!