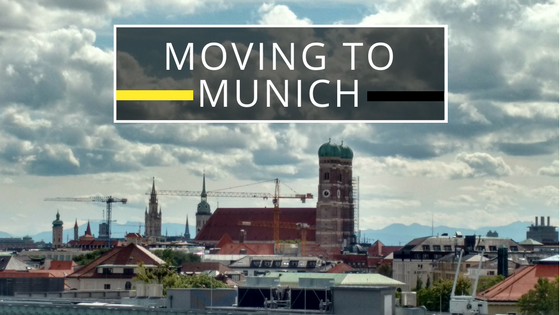 So many people back in the States, and here in Germany too, have asked me the same question: “So why Munich?”. To answer this question, I will start at the time I entered the “real world”. I guess that I could track all the way back long before then and delve into why I felt the way I did. But, I’ll spare you all of that ramble and give you the short version.

After graduating, I eagerly entered the “real world” of civil engineering with an open mind and hopeful expectations. A little “bright-eyed and bushy-tailed” you might say. I wouldn’t call my former self completely naive, though. I would say that I didn’t fully realize what I wanted out of life, or all that there was to see and do. Germany wasn’t so much a predetermined choice, but rather the result of lots of online research and thought.

I spent lots of time researching different opportunities available to an American wanting to experience another part of the world. Along with that, I put a lot of effort into thinking about what I really wanted, and how it would affect my future. After a couple weeks of internal debate, I set my mind on moving to Germany (or Belgium) to get a master’s degree. After applications and waiting periods, and lots of paperwork, I ended up deciding on moving to Munich while in a hostel in Hamburg. 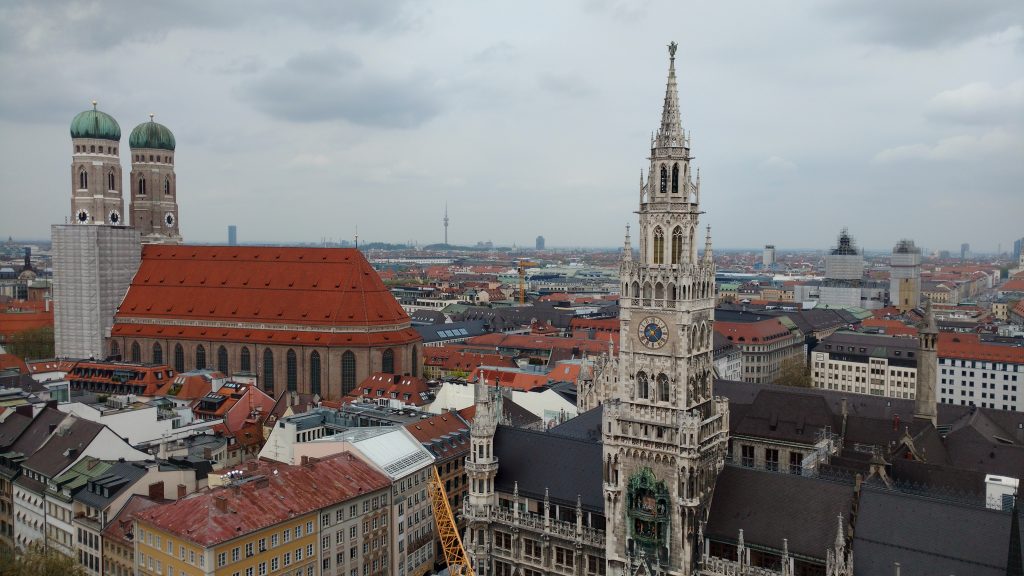 A view from the top of Peterskirche on a somewhat overcast April afternoon. Left: Frauenkirche and right: Altes Rathaus. Both are symbols of the city.

Munich is Germany’s third largest city with 1.4 million in the city alone and around 2.6 million people total for the entire metropolitan area. In comparison, Chicago, the third largest city in the United States, has 2.7 million people in the city limits alone and over 9 million in the metro area. I tell you that for a bit of background on the cost of living prices. Chicago, by the standards of other major American cities, is relatively cheap. My apartment in East Lakeview, right off the Lakefront Path, had 2 bedrooms and 2 full bathrooms. It wasn’t the swankiest place around, but it wasn’t old and outdated either. The living room was especially large. It was an absolute steal at around $1,600 a month for about 1,150 square feet, without utilities. Not one of my friends could beat our price per square foot.

Here in Munich, life is generally cheaper. I am moving into a very nice and recently renovated apartment next week. It’s a smaller apartment though, at 58 m² (624 sq. ft.), it has one bedroom, one bathroom, a much nicer kitchen, and a large living room, plus two south-facing balconies. We are paying just under 1,200€ a month, utilities included. I know the two situations aren’t exactly directly comparable, See here for an example of how cheap living in Munich is compared to Chicago (you can also see comparisons between other cities). Having lived in both cities, I can vouch for the accuracy of most of these typical prices.

As far as language goes, I have found it quite easy to transition to life here. Since moving to Munich, I have never had a problem communicating in either English or maybe Denglish with most everyone I meet. As my German has improved, a larger and larger percentage of my daily conversations switch to German from English. I do this for personal growth, though; it’s not necessary, but if you move to a foreign country with a different language and don’t try to learn it, you need to reevaluate your decisions.

Moving to Munich to Study

Moving to Munich for a degree has a few key advantages for Americans. Munich is a cultural and educational hub in Germany, with several great universities, and two world-renowned ones: Ludwig Maximillian University and the Technical University of Munich. I currently attend the latter. 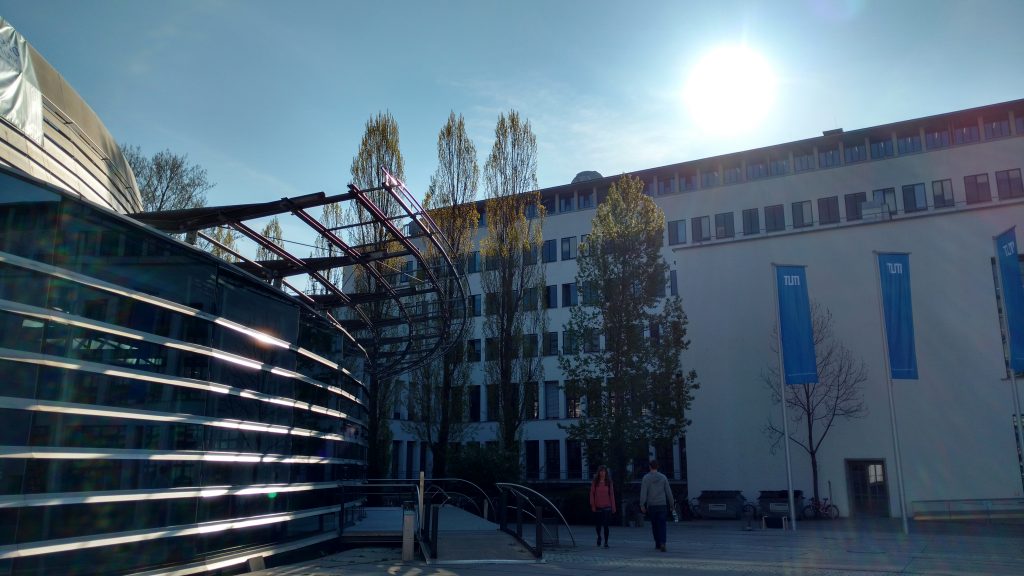 A crisp and sunny spring morning, not pictured: the omnipresent butter pretzel and coffee.

First, and probably most important, is that master’s degrees are often free of tuition or extraneous educational costs. The little fees that you do pay are not to the university itself, but to something called the “Studentenwerk”. The Studentenwerk is literally the student union. I mean a literal union of students, like a labor union. However, these fees do vary from state to state and from city to city. It is cheaper than a Master’s degree in the United States, though. Before all of you start talking about scholarships and working as a TA during your Master’s, let me explain something. They have these sorts of funding schemes too, except instead of paying for your tuition, they pay you actual money. Money that you can spend on things. Money that you can spend on beer.

Second, Germany and especially Munich has a large amount of degrees taught in English, something obviously necessary if you don’t have a mastery of a foreign language. Most of my professors are German but speak perfectly good English, with some odd quirks here and there. English degrees also provide another benefit, drawing in international students. The German university system is very much like our system in the United States. People from widely different countries across the world come to Germany to study. Universities here are more diverse and stronger for it. The large international presence makes it easier for students from around the world to continue to study here. In general, we feel very welcome and very supported.

Third is the rate of fluency, or at least competency, in English. This is important again for us English speakers, as it really helps you during your early stages of learning German. If you don’t know how to express yourself in German, normally you can switch to English. Most everybody under 40 will understand you and be able to speak English with you. Actually, German people often ask me to critique their English once they hear my native accent.

Moving to Munich for Work

Whether you are moving to Munich for your current job or to pursue new opportunities, the German work environment can be a welcome change for Americans. On average, German employees work fewer hours per week than their US counterparts. In addition, full-time German workers enjoy six-weeks of federally-mandated vacation per year. I have not worked full-time in Germany yet, but from what I have heard and what I can tell, the workplace culture is a bit more independent than the American workplace. I’m speaking generally, of course.

From what I’ve heard, this means that service industry employees work more independently, and have fewer meetings, than those in America. Now, to me, this doesn’t sound necessarily advantageous. In my former line of work, engineering consulting, sure, sometimes I would sit in on meetings of little use. However, most of the time, I felt like I contributed to and learned from meetings with my colleagues and superiors. Anecdotal evidence, I know, and I know most companies probably won’t be like this. Maybe fewer meetings would be very welcome to some of you!

Compared with the United States, wages are not as high here in Germany. This is easily offset by a lower cost of living and higher quality of life – especially in urban areas. So many of my American friends tend to think of Europe as this place where the government takes all your money and you’re left a member of the hoi polloi, no matter how hard you work. This is such a distinctly American perspective, and it’s wrong. Sure, taxes are higher here, but you get way more out of it.

Moving to Munich to “Get Out”

Look, I get it, sometimes people just want to escape their current situation. And sometimes they feel moving to another country is a good idea. Usually, it’s not. My dad mentioned something to me as I was in the later stages of applying to schools and organizing my life. It kind of offended me at the time, but in retrospect, it was good advice even if it didn’t apply to me. He said, “Tom, just make sure you’re not running away from something, but to something in the future”. Essentially, he was telling me to be proactive and not reactive. This is great advice for anyone, but it especially important for those looking to move abroad.

Moving to Munich, or moving to Germany, or moving anywhere else isn’t going to solve your problems. You’ll just bring them with you. Sure, this extra baggage may not cost you extra on the flight over, but it will weigh you down no matter where you go. I’m no counselor, and I don’t play one on TV, but I would say that in order to successfully move to another country you need to have your own emotions in order first. You need an already broad perspective on life to smoothly transition from one place to another. This may not exactly be what you expect to be written at the bottom of a page about moving to Munich. Unfortunately, I have seen too many posts on forums and social media about moving for reasons like this. Just don’t.