When I lived back in Chicago, I ran occasionally to keep up my health and fitness. My average run was about three or four miles, and I probably got around to it twice a week during my better weeks. However, I’ve noticed that in the past 6 months, I’ve been running more in Germany. Objectively, my run in Chicago was more scenic and beautiful than my run here. I lived in East Lakeview, very close to the north end of Lincoln Park and the Lakefront Trail. This is one of the best (and most used) running routes in the country. You get to run next to a lake, with Lincoln Park’s greenery and the beautiful skyline in the background.

In my current living situation, my run consists of running up a local street to a bridge which crosses the motorway and leads to a place called Südpark (South Park, cue Cartman’s voice). The park is a nice park to run though, it’s very much a kind of urban mini-forest with a web of dirt trails throughout. It’s nice, but no Lakefront Trail. Still, I find myself running more in Germany. So, why? I think this is the result of a couple of things: I have more time in my day. As a student, sometimes I have some extra time during the day to run and quickly shower afterward. Back when I was working, I didn’t have access to a shower to clean off after a mid-day run. Secondly, kilometers are shorter than miles. Seriously, this is huge. It feels so much better to say I’ve run 5 kilometers, than 3.1 miles. Sure yea, it’s shorter. But the psychology works for me, getting out and running a quick 5k is so much easier for me than 4 or so miles.

That second reason may seem a little silly, but I challenge you to switch to kilometers on your running app and tell me you’re not running more often.

Bonus photo from my running route! 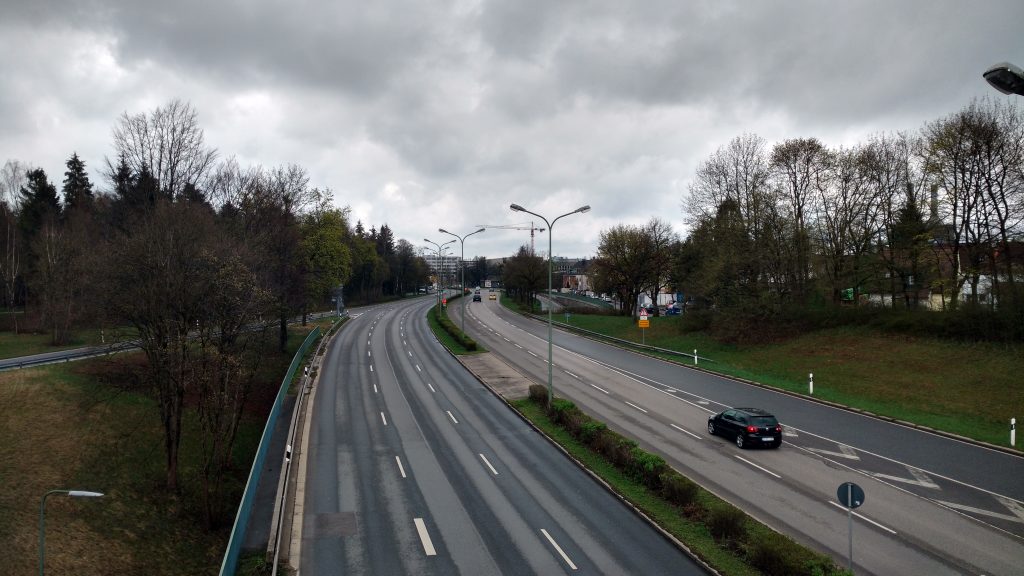 My normal route takes me over a motorway and into a small forest-park nearby.